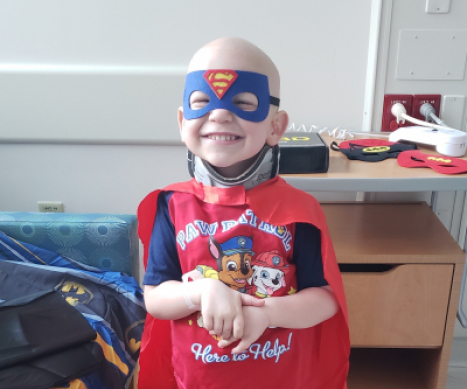 Jacob is a kid who knows how to keep his chin up. At 3 years old, he’s shown a lifetime’s worth of courage battling Ewing sarcoma.

One night, Jacob climbed out of his crib and fell on his left arm. The next day he was experiencing neck pain, but a trip to Wolfson’s Urgent Care suggested he had nothing more than a pulled muscle. The pain persisted, but again, the emergency room X-rays showed nothing out of the ordinary. It wasn’t until he stopped wanting to use both arms that the pediatrician sent them for a CT scan. This time, they found a mass in his neck, and Jacob was diagnosed with cancer.

The mass was putting pressure on his nerves, causing him to lose function in his arms. UF Health Pediatric Neurosurgery performed a biopsy and reduction, but with half the tumor wrapped around his spinal cord, they could only extract 40-50% of what was visible. They removed two vertebrae in his neck, and Jacob’s been in an Aspen neck brace ever since. Thankfully, part of the tumor liquified, meaning some of the cancer cells miraculously began dying off.

Jacob received chemotherapy every two weeks and finished six weeks of proton radiation in March 2020. But with COVID-19 safety restrictions in place at the hospital, only one parent could accompany him during these treatments. His compromised immune system meant their family had to be extra careful in quarantine. They often needed to have items delivered and accommodations made for Jacob’s sister, Anna, when she couldn’t visit him in the hospital.

It was hard for Jacob without his team there to cheer him on, but he responded to treatment like a champ, concluding chemo in July 2020 and receiving scans every three months. Throughout their journey, Jacob’s mom said Alex’s Lemonade Stand Foundation has been a “shining light in the darkest time of our lives.” Today, Jacob is out of his neck brace and in remission, and his whole family is so proud of how far he’s come!

Donate in Honor of Jacob Today!