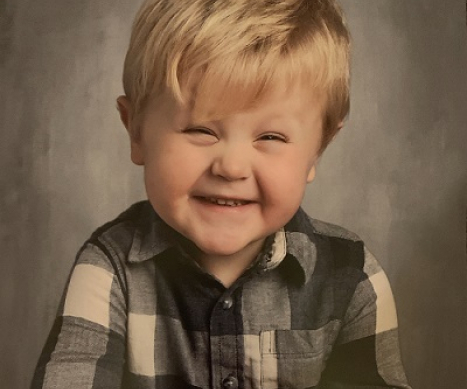 John Robert was born with a heart of gold and the ability to make anyone smile or laugh. His caring personality shines through in his love of animals and enthusiasm to help out in the kitchen. He’s a big fan of superheroes, dinosaurs, animals and plays with Hot Wheels in his free time.

At 2 years old, John Robert’s family was bouncing back and forth between visiting family in Georgia and Texas when they had a medical emergency. They rushed to the nearest children’s hospital in Texas, where the doctor ordered a handful of tests and an ultrasound for John Robert. A nine-centimeter tumor appeared on the ultrasound, engulfing his left kidney. After a CT scan and the discovery of lymph nodes, his diagnosis was official: stage III Wilms tumor.

Two days later, a plane flew the family back to Atlanta and their new oncologist. Dr. Bradley George and his team made the world feel a lot less cruel as they guided John Robert through a kidney removal surgery, port insertion, 15 rounds of chemotherapy and six rounds of radiation. As of January 18, 2019, John Robert has no evidence left of the disease.

John Robert’s mother, Dannielle, hopes this is the beginning of a healthy life for her sweet boy. She dreams of seeing him meet every one of his life goals as he grows up and grows old. John Robert is his family’s hero for the bravery, fierceness and strength he demonstrated during a battle no 4-year-old should have to face. He never let things like losing his hair, side effects from chemotherapy, or long stays in the hospital keep him down. Dannielle believes her son is the best thing God has blessed her with. For all the times when it felt like her world was crumbling, John Robert gave her strength.

For other families seeking advice after a cancer diagnosis, Dannielle thinks that no one is alone, and it is important to seek help when you’re ready. “Trust your parenting gut and know that people will listen to you if you feel something is off,” she says. Lastly, she suggests taking time to understand your emotions and holding fast to faith when times are dark.

For John Robert’s family, Alex’s Lemonade Stand Foundation (ALSF) serves as a place they can reach out to for help. They are amazed by both the support ALSF provides and the research they fund. Since they live in Alaska, and Dannielle is an ALSF Ambassador, the family is excited to join forces with the organization to create some new events for their community. They want to let other families in Alaska know that they are not alone in their fight.

Donate in Honor of John Today!