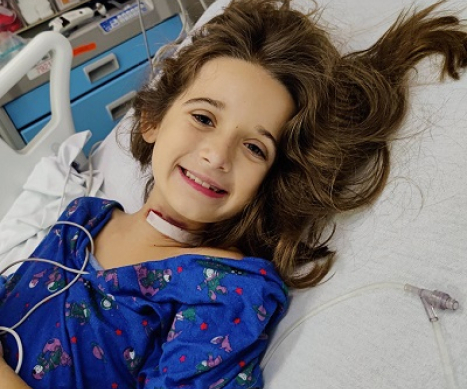 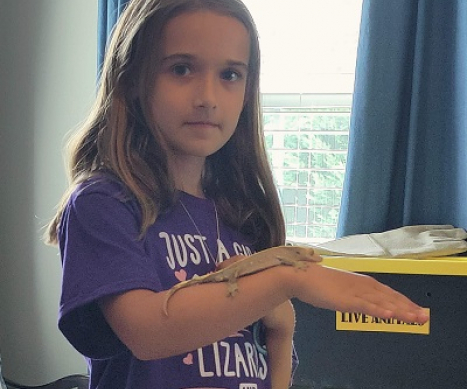 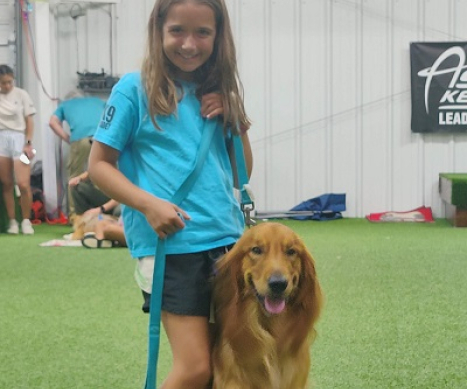 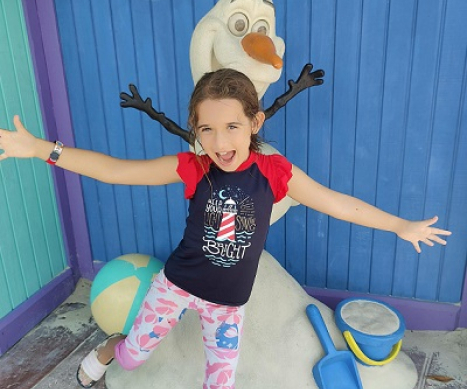 Get the facts about Thyroid Cancer and how our research projects are making a difference.

Julie is a spunky 9-year-old girl who loves all living things. After finding the Snake Discovery channel on YouTube, she has been especially interested in creepy crawly critters. She loves Dr. K's Exotic Animal ER and has dreams of becoming a veterinarian when she grows up, so she keeps her brave face on as she fights thyroid cancer.

In 2021, Julie had a persistent cough that stumped her doctors. After many months and many different treatments, she was referred to specialists: first, a pulmonologist to check her lungs, then an ENT to check her throat and a gastroenterologist to check her esophagus and stomach. During all these appointments, she was also visiting her pediatrician. One day, she said her ears were hurting, and the pediatrician felt a nodule in her thyroid. Julie was sent for an ultrasound and bloodwork that same day and was referred to a local endocrinologist. The doctors conferred and she had a litany of scopes and biopsies on October 28, 2021. After being assured it wasn't anything serious, the doctors were dumbfounded when they saw Julie had a laryngeal cleft and eosinophilic esophagitis, an allergic condition in her esophagus. The biopsy of the thyroid nodule came back inconclusive, so they sent it out for more tests.

At this point, Julie and her family were not only frustrated, they were desperate for answers.

Because pediatric thyroid cancer is so rare, Julie’s family went on the hunt for as much information as they could find. What they found was Children's Hospital of Philadelphia (CHOP) and one of the leading pediatric endocrinologists in the United States. This endocrinologist disagreed with the local doctors' findings and suggested Julie come to Philadelphia. Early in the morning on December 5, Julie and her family flew all the way from their home in Greenville, SC to meet with her new endocrinologist, Dr. Bauer. After performing a thorough ultrasound, he saw a large nodule and several unhealthy lymph nodes. Seeing as CHOP is a teaching hospital, there were several curious residents who jumped at the chance to see and feel such a rare occurrence in an 8-year-old. The following day, they did another biopsy of the nodule and several lymph nodes. It wasn’t until then that they confirmed Julie and her family’s fears: their precious only child had thyroid cancer.

At first, Julie felt great coming out of surgery. However, she soon got sick to her stomach from all the medications and was in a lot of pain. She also wasn’t getting much sleep since the nurses were drawing blood every few hours to check her calcium and vitamin D levels (these can be affected when the parathyroid glands are disturbed). The hospital kept Julie’s family for two nights to continue monitoring Julie. When they could finally leave, Julie was black and blue. She didn't complain, but you could tell she didn't feel well. They flew home the following Tuesday where she could recover in her bed, but Julie’s treatment wasn’t finished.

Julie’s family decided that they would continue care with her doctor at CHOP and arranged to go back up during Julie’s spring break from school. The next step in thyroid cancer treatment after surgery is called radioactive iodine treatment. To prepare for this treatment, Julie had to stop taking her thyroid replacement hormone for three weeks and go on a strict low-iodine diet. She handled all of this like a champ and once again, flew up to CHOP where she was radioactive for a few days. After a tracer dose, doctors performed a full-body scan to make sure the medicine was being absorbed and to measure any spread. Julie’s family knew there was a possibility of spreading to her lungs and bones, but nothing could have prepared them for the news they got instead: something lit up in Julie’s brain.

So, instead of doing the treatment as planned, she underwent hours of CTs and MRIs, with and without contrast material, to precisely measure the size and location of the legion in her brain as well as leftover cells in her thyroid bed. The nurses and doctors all raved about what a good patient she was as she stayed completely still for all her scans. She wiped her mother’s tears and reassured her that everything was going to be ok. She had a second surgery in the following days to remove a large lymph node all the way up near her ear canal. She bounced back almost immediately from this surgery and felt much better than the previous one!

Finally, after a few weeks of flushing the iodine from the contrast material from her system, they were able to move her radioactive iodine treatment closer to home at the Medical University of South Carolina in Charleston. But that meant another three weeks without the thyroid hormone, plus continuing a grueling diet. Today, she’s doing great from the treatment. In December of this year, she will have follow-up scans that will show if the treatments have worked.

Michelle, Julie’s mom, has hopes for Julie to live life to the fullest. She dreams that her daughter can put this in her rear view and remember it as a challenge that she fought and won.

Julie is her family’s hero because she has been through more in the last nine months of her short life than most people endure in a lifetime. Through it all, she is always first to help others and see the good in her situation. She seeks out those who are shy and scared and befriends them. She loves with all her heart, always has a smile on her face and is a truly amazing human.

To other families who may be facing a childhood cancer diagnosis, Michelle says, “It's ok to feel however you feel. Some people cry, some people get angry and some people try and avoid. You are doing the best you can, and whatever that is, it's ok. Don't let anyone tell you that you're not dealing with your child's diagnosis the right way or you should be doing this or that... Continue to be the best advocate for your child that you can and I'm so sorry you're dealing with this.”

To Michelle, Alex’s Lemonade Stand Foundation does a great job spreading awareness, which is so critical to finding cures and treatments for children. “Children are our future, and they should be given the best chance at life,” she said.

Donate in Honor of Julie Today!