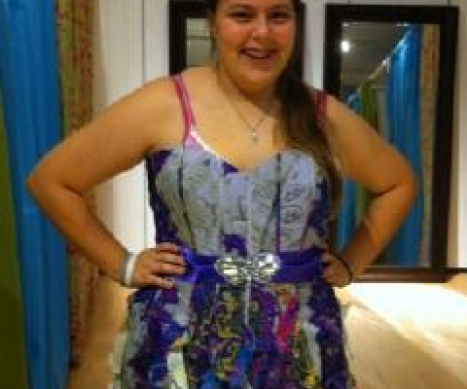 Kayla was a fun, happy person. She always knew how to make people laugh and loved just about everyone. She was a protective big sister and mean “mama bear” when someone hurt her sister or her friends. She was a member of the International Thespian Society at her high school and performed in all school productions. She loved theater and volunteering at her church. Kayla wanted to be an elementary school teacher. She is loved by many, and won't be forgotten.

Sometime in January 2013 during Kayla's senior year, she started getting massive headaches. Her headaches became so severe they would interfere with her participation in her school’s theater department. Kayla’s mom eventually took her to the doctor to figure out what was going on. The pediatrician sent them to the ER to get medicine to relieve the headache and nausea. The symptoms returned days later. On opening night of a show Kayla was performing in, her dad and several other parents backstage noticed Kayla’s left side of her face was drooping. At the ER for a second time, a CAT scan revealed a mass in her brain. After some tests, Kayla was diagnosed with diffuse astrocytoma.

Kayla went through radiation and chemo at UNC Hospital. Her brain tumor was inoperable and could not be removed. Kayla and her family went to Duke Brain Cancer Center for a second opinion. A few weeks after coming to Duke, Kayla’s MRI showed the tumor had shrunk. Kayla was put on a new trial medicine, but the tumor grew. She passed away two years after being diagnosed.

Kayla is her sister Lili’s hero because she was brave. She never doubted herself in getting better and she had so much confidence in herself even when things weren't looking so great. Lili says, “I wish I had that confidence. I wish I was able to look at things in such a positive way like she did.”

Kayla’s mom advises other families to use your resources, ask for help, let people do things for you – don’t push them away and find someone you can talk about it with.

Kayla’s family hopes that Kayla's name is not forgotten.

Donate in Honor of Kayla Today!