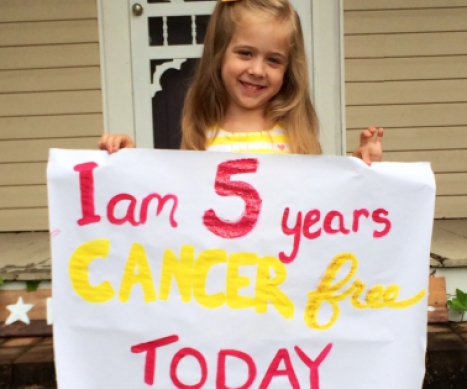 Lucy was diagnosed with neuroblastoma, stage 4S low risk on April 15, 2009. It all started with an ear infection the week before Easter, Lucy was 10weeks old. She had a high temperature so we were sent to the ER, where they sent us home saying she was fine. We followed up with the pediatrician the next day and were told she had an ear infection and to come in on Saturday to see how she was doing. Seven days passed and her dad (Scott) took her to the doctor’s visit, as I was working.  Scott called me telling me that the doctor felt Lucy's liver was enlarged so they were off to get an ultra sound. Less than 2 hours later Scott calls me again saying we have to go to the Children’s Hospital of Philadelphia (CHOP) because Lucy's liver was enlarged!! Once I was relieved from work I ran home, packed up the diaper bag and headed to CHOP (never thinking we would be there for a week). Driving there we were thinking we are so thankful to have such a great hospital so close by. We were also wondering what was wrong with our little girl, and praying that she could be cured of whatever was causing her harm.

We finally made it there and were relieved that the ER was empty! We walked Lucy right in and they immediately started running tests on her. No one in the ER really knew what was going on with her liver. As they were about to send us home Lucy's mouth turned a shade of blue for a minute. I think that was a sign that there was no way that we were going home, that there was something wrong with this baby. The blue mouth changed the flow of things immediately and more tests were being run as we were being admitted to the hospital. After seeing a few different specialists and doing a few more scans they finally had an answer (3days later) as to why Lucy's liver was so big. As the Chief Pediatrician sat us down we didn't know what to think or feel... then he told us that her liver was so big because of a tumor! Once he said that, we went into Fight Mode and have been fighting ever since.

Lucy was moved to the oncology floor (3south) where we met her awesome doctor, Dr. DeBlank. After a biopsy of the tumor, bone biopsy and bone    marrow aspirate it was determined that Lucy had neuroblastoma stage 4S, low risk. Since she was “low risk” the oncology team determined that she could be under “watchful eye.” Low risk neuroblastoma tumors can mysteriously go away on their own, there isn't an answer as to how or why that happens. But we didn't care, to us it meant that Lucy didn't need chemotherapy... yet. After a few weeks of visiting CHOP twice a week for her doctors to measure the tumor and get her vitals, we were eventually admitted and there was talk of chemotherapy. We went in for our normal visit and just didn't come home.  After a couple days of determining what kind of treatment Lucy would undergo she eventually started a 3 day chemo. She did well considering the type of “medicine” that was being pumped through her veins. She was our little fighter and we were on Team Little Lucy :).

After three weeks passed from undergoing treatment Lucy was back in the game and good to go for Round 2. This time it was a 1 day chemo and our little fighter did just that, fought and kicked chemo’s butt! The initial plan of action was for Lucy to undergo 2 rounds and then she would get scans to determine the size of the tumor, if it shrank more than 50% she would be back under “watchful eye.” And that she was!!! No more chemo for Lucy (for now, never say never). Three months later Lucy got scans again and her tumor was gone!!! September 14, 2009 Dr. DeBlank said that Lucy's scans were CLEAR, she was CANCER FREE!!!

Lucy has just completed her 1 year follow up visits & scans (it's weird but 1 year in reality will be in September, we are ahead of schedule). Now she will visit CHOP every other month with an MRI every 6 months. Right at the start of all this I said that this would be our fight for life and that is what we are doing, fighting to find a cure with the help of ALSF :)

Donate in Honor of Lucy Today!