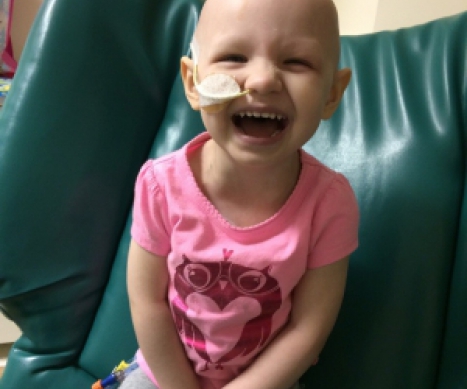 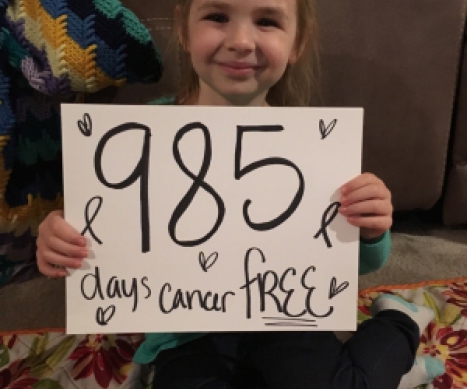 Finally, at one ER visit, the attending ordered an X-ray, which seemed to reveal a fracture in Malina’s leg. Malina was sent home with a boot for her leg and an appointment with an orthopedist.

Listening to Malina’s story, the orthopedist knew this was not just a fracture. He ordered an MRI of Malina’s hips. Before Malina could have her MRI, her temperature started spiking, she became cranky and stopped having wet diapers. Her mother, Amanda, called the orthopedist who sent them back to the ER.

An emergency MRI revealed that Malina had a mass in her spine, pushing on her nerves and cutting off all function from the waist down. Within an hour Malina, who was just 19 months old, was being prepped for spine surgery. The diagnosis was Ewing’s sarcoma, a type of bone and tissue cancer that typically begins in the long bones of the arms, legs, pelvis and chest. In addition to surgery, Malina’s treatment included radiation and chemotherapy. She also continues physical therapy.

Her family enrolled her in a study, led by ALSF-funded researcher Dr. Glen Samuel at Children’s Mercy Kansas City. Each clinic visit, Malina gives one extra vial of blood. Dr. Samuel is using the sample to study the biomarkers of Ewing’s sarcoma that might make detection of reoccurring disease quicker and less invasive.

Today, Malina is 5 years old and cancer-free. She recently was able to visit the lab where Dr. Samuel is studying Ewing’s sarcoma and see how her participation is making a difference for other children.

Together with her family, Malina is a regular participant in Midwest Lemonade Days and raised over $5,300 in 2017 at their lemonade stand.

Donate in Honor of Malina Today!