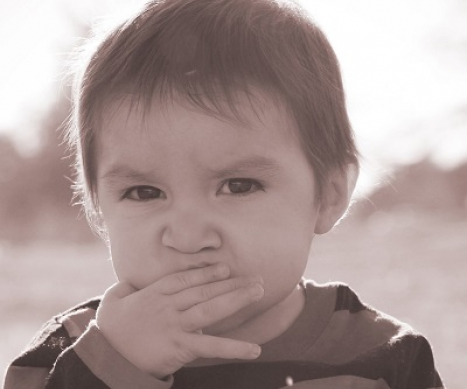 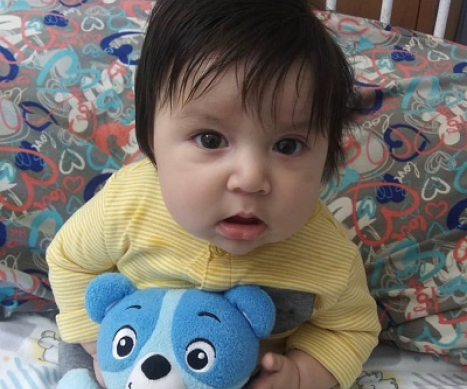 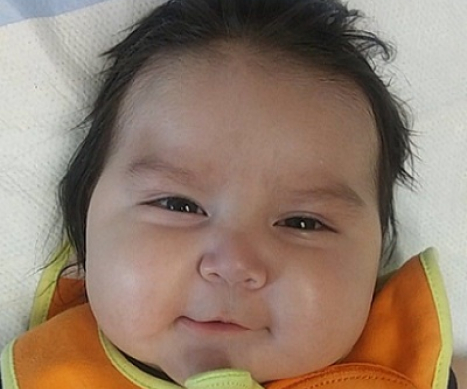 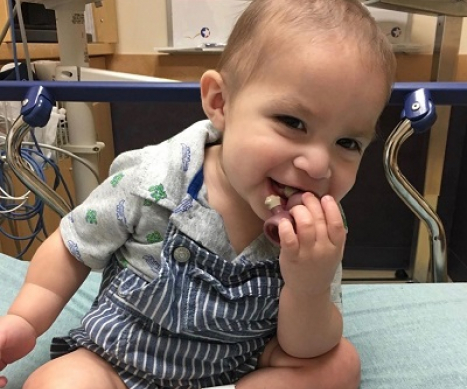 Max is a year old, a little goofy and a big mama’s boy. His favorite things include dancing, watching cartoons and playing with his brothers.

At the beginning of September in 2018, Max’s parents noticed a bruise on his head. It wasn’t clear where it came from, but once it started morphing into what looked like a mosquito bite, they consulted his pediatrician. Max’s mom, Alex, thought that maybe his brother, Zeke, hit him on the forehead with a toy and their pediatrician told them to come into the office if it got bigger.

Sure enough, Max’s bruise grew. At first Max was told it was a knot, then a radiologist said it was hemangioma, also known as a birthmark. Max got an MRI at Dell Children’s Hospital in Texas just in case, and thank goodness he did – it revealed a tumor. Things moved quickly for Max after that.

Max was scheduled to meet with an oncologist on a Wednesday, but the day prior, after an X-ray and some blood work, Max’s pediatrician asked that he be taken to Dell Children’s emergency room immediately. His blood count levels were off the charts and the X-ray revealed another tumor in his cheek. By that evening on September 25, 2018, at only 3 months old, Max was diagnosed with leukemia.

Overall, Max handled treatment well, but it wasn’t easy. He faced a lot of curveballs – from muscle pains so severe he couldn’t be carried to an itchy nasogastric tube (because he could no longer eat on his own) and nausea – he experienced it all. Since Max was a baby, chemotherapy was incredibly harsh on his skin. He developed diaper rashes and eventually the norovirus as a result. He had no immune system to fight any of it.

Throughout Max’s year of treatment, his parents, doctors and nurses all kept positive attitudes. But Max was most impressive – even now, when Max’s mom Alex thinks about the condition he was in, she is blown away by how strong he was. Despite all he was going through, Max was still a typical baby, laughing, playing and hitting his milestones while in the hospital. Today, he is doing one-month check-ups, taking chemo at home and growing and playing.

While in the hospital, getting to and from Dell Children’s posed another problem for Max’s family. Alex quit her job to stay by Max’s side 24/7, especially when treatment was getting rough with all the side effects. Her husband, Chris, brought Max’s brothers to see Alex and Max on the weekends, but with only one income, driving to and from Dell Children’s was becoming costly. To help alleviate the expense, Alex was connected with Alex’s Lemonade Stand Foundation’s Travel For Care program through her social worker, and was given a gas card. This made focusing on Max’s battle much easier.

“Until someone walks in a cancer parent’s shoes, they don’t know exactly how hard and how stressful it is,” said Alex. “A foundation like Alex’s Lemonade Stand Foundation understood and wanted to help us, so we could put that money to another bill. And that was just an overwhelming feeling of relief that we could focus on Max’s healing. We can focus on Max’s battle. We can focus on everything else. The donations are just a big help to all the childhood cancer families, like ours.”