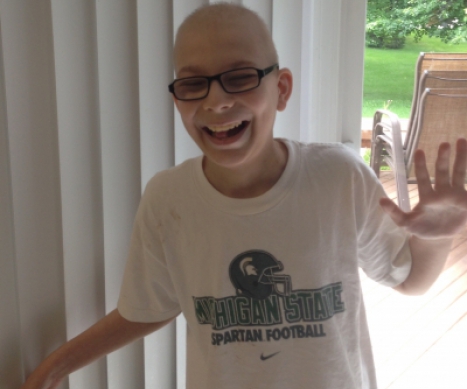 This past spring, the Rostker’s family doctor heard a murmur in Michael’s heart. A pediatric cardiologist found fluid around his heart and sent Michael and his family straight to the PICU at Beaumont Hospital in Royal Oak, Michigan. It was the day after Michael’s 11th birthday. A chest x-ray and CAT scan showed a tumor near his heart. After numerous tests, including a double bone marrow biopsy, a biopsy of the tumor, a spinal tap and draining 10oz. of fluid from around the heart, he was diagnosed with Diffused large B-cell lymphoma.

Michael has undergone 6 rounds of inpatient chemotherapy so far.  He will have a PET scan at the end of September for a status update and to restage the cancer.  Hopefully the treatment will kick the cancer out of his body and he can resume a normal childhood free of worry and pain.

Michael loves to help others and hopes to hold a lemonade stand to raise money for cancer research, in the hope that a cure will be found sooner rather than later.

Quote: “Cancer sucks and affects the whole family. Together we are stronger.”

Donate in Honor of Michael Today!