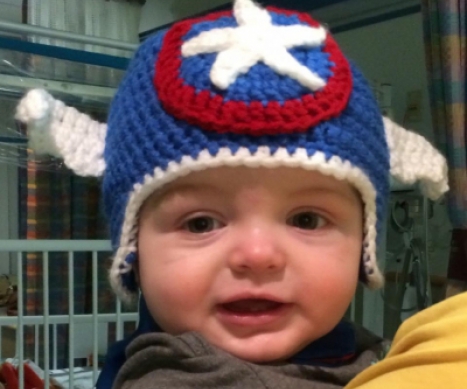 Owen is a sweet 8 month old baby boy. He loves people and is always ready to greet people with a huge smile, even from a hospital bed. He loves his older sisters and laughs when they dance for him. He loves to snuggle! His favorite thing to do is to scoot around the house in his walker and jump in his activity bouncer.

Owen was 6 months old when his mommy and daddy noticed that his head was looking much larger than usual. His mommy noticed that his fontanel (soft spot) was bulging and felt like there was fluid under his skin.

He was taken to Children's Hospital of Philadelphia, where he was diagnosed with hydrocephalus. An MRI was done to determine the cause of the hydrocephalus and it revealed a mass on his brain stem. After two surgeries to relieve the fluid and intracranial pressure, implant a shunt and biopsy the tumor, his parents received the horrific news that the mass was indeed a cancerous tumor.

The type of tumor Owen has is characterized under the glioma category but the specific tumor is very rare and was only recently discovered. His neuro-oncologists at Children's Hospital of Philadelphia have never treated an oligondendriglial leptomeningeal tumor. It is characterized by the hydrocephalus and small masses found throughout his cerebellum. The tumor appears to be low-grade, but again it is a tumor that his doctors have little experience with.

Owen is undergoing chemotherapy once a week as an outpatient. His tumor cannot be removed because of where it is on the brain stem. His parents hope that the chemo is successful in shrinking Owen's tumor and preventing it from spreading. They hope that their baby boy lives a very long, healthy life and can enjoy all of the things that little boys should be able to enjoy.

Despite all he has been through, Owen continues to smile and laugh. His smile melts your heart and his eyes still have the same twinkle they have always had. He has several incisions on his head and a large one down his neck, but it doesn't seem to faze him. He still wants to play and have fun.