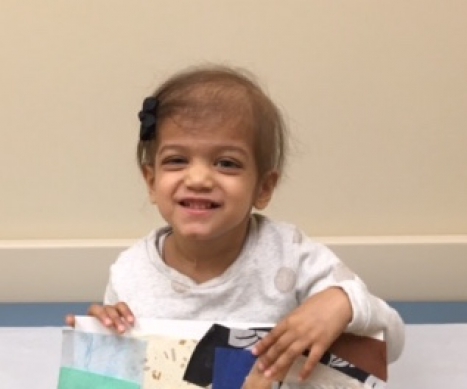 Raina is so full of life. She is a shy little girl, but energetic and so loving. She takes a while to open up, but once she lets you into her little circle of trust, you're there for good. She will bestow endless amounts of love and affection on you. Her laugh is infectious. When she starts to giggle, it makes you want to giggle with her. And she has the most expressive eyes, you can tell everything she's thinking and feeling - the good and bad.

Raina's leukemia manifested itself like many others, as a simple virus. It started with a fever that was treated quickly with Tylenol. She complained about her hands hurting, but she was still using them. Two doctors were unable to find anything wrong with her. They chalked it up to aches and pains from a viral infection and told her parents to keep an eye on her. Then, she started to develop swelling around her ears and her lymph nodes. It happened so gradually, her parents didn't actually notice it until it became quite prominent. The doctors thought it was due to blocked salivary ducts and recommended warm compress and massage. If she developed any other symptoms, they were to bring her back. Then, she developed petechiae, that's when her mother Deepti’s heart sank and she started to imagine the worst. The family was traveling this whole time so they waited 2 days until they got home and took her straight to the pediatrician. The pediatrician took one look at her (literally) and sent them to get lab work done. Just 15 minutes later they were told that Raina had ALL. That afternoon, they were told that her WBC put her in the high risk category. That is when their lives changed forever.

Raina started treatment in Singapore, where her family was residing at the time of diagnosis. Treatment for ALL is pretty standardized, with slight variations based on protocol/country. She was slow to respond initially, but has handled it remarkably well. Though Raina and her family spent most of the first 6 weeks in the hospital fighting various infections, she's since been great. She has so much energy that outside of the clinic it's hard to tell there's anything wrong with her.

Deepti says her hopes for the future are, “I want Raina to experience as normal a childhood, as possible. I want her to experience all the things kids her age experience. I want her to go to pre-school and then elementary school. I want her to play outdoors, enjoy sports, run around and just be a kid. And after she gets to be a kid, I want her to be able to grow up, as normally as possible. I know that's asking for a lot given her current circumstance. I know there will be lots of effects we will have to deal with. I hope she can have dreams and aspirations and follow them without any hesitation. And I hope that whatever she's going through now helps motivate her to follow those dreams. I just hope she's happy.”

Deepti wants others going through a similar situation to know it's tough and it's lonely. Don't be afraid to ask for support. Often times, friends and family are uncertain about how to best support you. If you need help, ask for it. People want to help, they just don't know how. Talk to others who have been in a similar situation. Use the resources you have available to you, it helps makes it easier. And as selfish as it might seem, take care of yourself. If you aren't well, you can't offer your child the support they need. You can't be there for them in the capacity they need you. So when things are a little better, take time for yourself because that's important too. And it's ok to need that. Don't feel guilty about it.

To Deepti and her family, ALSF means, first and foremost, an opportunity for awareness. Before her daughter was diagnosed, like most, she had no idea. She was unaware how little funding goes to childhood cancer and how many children were diagnosed. Children need a voice, they need to be heard and they need someone to stand up for them. She hopes that the money raised by ALSF will help focus on finding cures for cancers that have low survival rates and that the money can be used to help researchers focus on how to develop treatments aimed at children. There are so many long term impacts children have to deal with, she hopes that focus can be put on how to lessen the long term effects so survivors can live complication-free lives.

Donate in Honor of Raina Today!