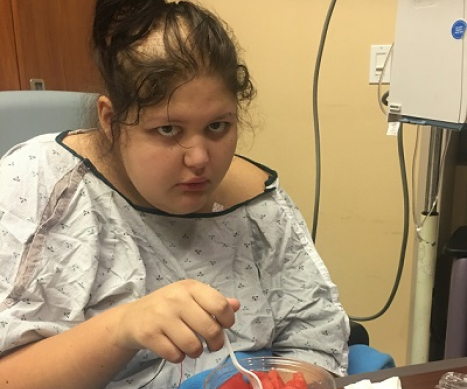 Sophia is a 13 year old who loves to sing and has been taking voice lessons for years. She is incredibly creative and finds ways to express herself through songwriting, coloring and painting. One day she hopes to learn how to play lots of instruments, starting with the guitar.

In December 2019, Sophia was diagnosed with leukemia. She needed surgeries to place a port in her chest and a tool to deliver medicine through cerebrospinal fluid. Two different surgeons performed the procedures on the same day and Sophia was free to have chemo treatments the following Monday. Unfortunately, soreness in her chest and inflammation at her port revealed that Sophia was facing life-threatening sepsis due to an infection from her surgery. Both pieces from her procedure had to be taken out immediately.

Doctors suspect Sophia is immune to common sterile cleaning solution, so doctors need to take extra precautions to avoid infection when she has surgery.

While Sophia was recovering from sepsis, she had a bad reaction to a chemo treatment she received via spinal tap. She was paralyzed for two weeks; her movements were minimal. Some days she could barely speak at all. Now, she is using a walker and will need time to build up her muscles once she has a break from the nausea she faces as a side effect from chemo. After many difficult experiences at the hospital, including one stay that lasted 50 days, Sophia is struggling with post-traumatic stress disorder, for which she is receiving therapy.

Despite her share of complications, Sophia’s strength is inspiring to many. On days when Sophia feels low, her mom, Joann, is strong for her. Through it all, Joann has faith in God and prays for the day that her daughter will have energy, no pain, and a big appetite. Sophia’s latest bone marrow test showed no leukemia present, so it is their hope that these treatments remain successful.

Alex’s Lemonade Stand Foundation (ALSF) has been a huge blessing to Sophia’s family. As a single mother to two young children and another who is grown up, Joann has a lot to take care of. She says that knowing they have support and prayers coming from others who’ve been in similar situations gives her family great comfort.

The COVID-19 pandemic has added a layer of difficulty to Sophia’s situation. Her family travels two to five times a week but Sophia’s little brother is not allowed to accompany her and her mom. Spending so much time apart has been hard on all members of the family. As a single parent, Sophia’s mom has not been able to work since her daughter’s diagnosis. With the COVID-19 Emergency Fund, ALSF has been able to provide Sophia’s family with necessities like groceries. Sophia’s family is very appreciative of the aid they have been able to receive during this difficult time.

Donate in Honor of Sophia Today!