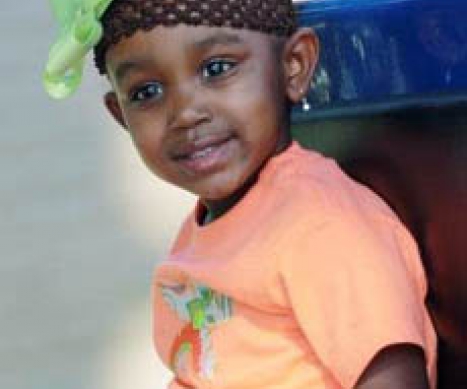 Starla Chapman of Bay Minette, Alabama, was diagnosed with Acute Myeloid Leukemia on September 13, 2011 - just a month shy of her third birthday. Starla was experiencing unexplained bruising followed by leg pains, which prompted her mother to take her to the hospital. After a weekend in the hospital as physicians ruled out several other illnesses, they performed a bone marrow aspiration on Starla and only then was she diagnosed with cancer.

While bravely enduring one of the six rounds of chemotherapy that Starla would ultimately go through, she went into cardiac arrest. Her little 3-year-old heart had weakened and failed and the doctors predicted that it was unlikely that Starla would survive. If she did – she would not be strong enough to complete the remainder of her chemotherapy treatments.

Defying the odds and demonstrating her ability to overcome any obstacle in her path – Starla pulled through and completed her remaining rounds of chemotherapy. She is currently in remission.

Today, Starla is a very outgoing and smart toddler who likes so many of the things a normal 3-year-old enjoys – painting, Disney princesses, Dora and playing dress-up. Although her Mom recognizes that each case of cancer is different, her faith has helped her through their journey as well as the hope that a cure will be found.

Donate in Honor of Starla Today!