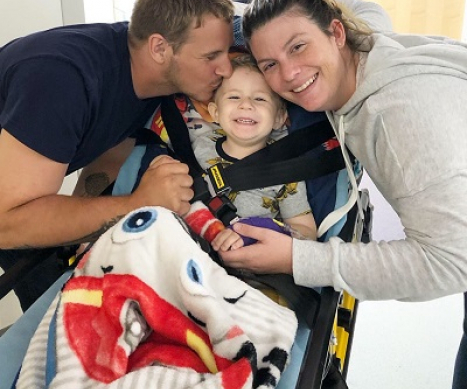 Tucker is an outgoing and curious 4-year-old. He always wants to know who, what, when, where, and why. He is dramatic, funny, sensitive and beyond caring. His family refers to him and his journey as #TUCKERTOUGH because he is the toughest boy they know.

One day Tucker’s parents noticed a lot of bruising on his legs, arms and along his spine. His attitude had shifted in the weeks prior. His appetite went down. And his legs had started to hurt him. When he was diagnosed with B-cell acute lymphoblastic leukemia, they finally understood why.

Tucker was transferred to St. Jude Children’s Research Hospital in Memphis for the first nine weeks before returning to his hospital in Illinois. After many inpatient experiences, lots of steroids and spinal taps that made for difficult weeks, Tucker hit remission in August of 2019 and has stayed that way since. He is currently in the maintenance stage, responding well to treatment and has more good days than bad. Tucker was also randomized to stop steroid and vincristine for the remainder of treatment, which means he will undergo less chemo and have less side effects for the short- and long-term.

His mom, Morgan, has many hopes for Tucker. She wants him to have a happy childhood and hopes to raise him to be a smart and good man. She wants him to grow up telling his story and advocating for other children. She also wants all of his dreams to come true. The resilience that this boy has shown is remarkable to her. He was 2-and-a-half years old when diagnosed and is now almost 4. His family is beyond proud of him and he is their hero.

Morgan also has advice for those facing a childhood cancer diagnosis: “Be strong for your baby. Take a breath and just put one foot in front of the other. There is an army of cancer parents with you in this fight. Lean on your army. Sometimes it’s so hard to cry and scream, but let it all out when you need to. And advocate for your kid. YOU know what is best!”

Tucker’s family uses a treatment journal to keep track of his appointments, something they received from Alex’s Lemonade Stand Foundation (ALSF). Morgan hopes that in her lifetime, a cure will be found for this horrible monster stealing children away. She hopes to see more chemotherapies made specifically for children. And she is grateful for ALSF continuing to advocate for all children and giving them a voice.

Donate in Honor of Tucker Today!