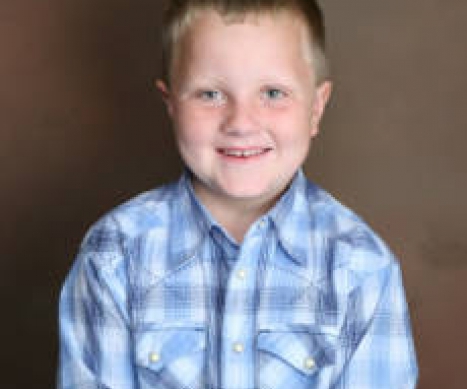 Get the facts about Spinal Cord Tumors – Other and how our research projects are making a difference.

When Wyatt was 15 months old, he was diagnosed with a rare ganglioglioma inside his spinal cord starting at level c-2 and going to c-7. Three months earlier is when we started seeing symptoms. He cried a lot, vomited often, choked when he tried to eat, lost his balance and each day the symptoms were gradually getting worse. We took him to the emergency room several times before an MRI was finally done and that is when they found the tumor. His brain and cord were so swollen at that time that they had to wait to do surgery.

A round of steroids brought the swelling down enough for the neurosurgeon to go into Wyatt’s spine in an attempt to remove the tumor or as much of it as possible. The 12 hour surgery was performed four days after the diagnosis in order to save Wyatt’s life. This is when they discovered it was a benign tumor but considered it malignant because of the location inside the spinal cord and so high up near the brain stem. Wyatt spent several weeks in the hospital followed by a stay in a local rehabilitation hospital where he did many hours of therapy to relearn how to swallow, walk, talk and move his arms once again.

As time went on, we slowly realized Wyatt was getting some type of sensation back in his hands and arms, as he would often scream and think that bees were stinging him. This finally resolved itself and life was pretty normal for a brief period, aside from his scheduled MRI every three months. But gradually the symptoms emerged once again as he had a lot of pain in his head and neck, had trouble walking relatively long distances, and so another surgery was needed to alleviate the symptoms. Again, his neurosurgeon attempted to remove the regrown tumor, followed by another few weeks in the hospital and then the rehab hospital where he had to learn all his daily functions again.

At the present, it appears that Wyatt does not have much feeling at all in his arms and hands, but continues to amaze everyone who meets him as he is able to do so many things other kids his age can do despite his impediments and encumbrances. He really is an amazing and determined child.

Since his last surgery, Wyatt has had continuing issues with bowel control, due to the spinal cord trauma, and most recently he has moderate sleep apnea. He is currently in school and loves it, loves living on the farm, the animals and all that country life has to offer him. He also loves spending time with his friends. Meanwhile, he continues to undergo an MRI every six months to monitor possible growth of what might be left of the tumor and sees a hosts of specialists on a regular basis.