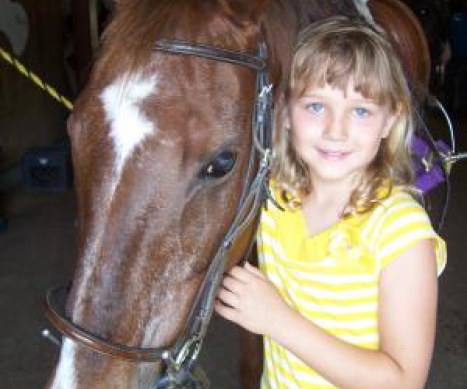 Christi was diagnosed with Neuroblastoma at the age of 5. She met Alex Scott on her very first trip to CHOP in 2003 and was inspired to help, holding her first lemonade stand in her home state of Ohio. Later, on the Heidelberg College campus, she held another stand. Professor Lori Grine invited Christi to visit her classrooms of future teachers. They would sit with tears in their eyes and listen as Christi read “Alex and the Amazing Lemonade Stand.”

Over the next three years Alex & Christi’s lemonade stands held at Heidelberg and at other locations in the Thomas’s hometown raised over $12,000 for Alex’s Lemonade Stand Foundation. Christi's lemonade stands were the highlight of the year for the Heidelberg College Early Childhood Education Department. With the lemonade stand came Christi herself with her broad smile and contagious spirit.

Not only did Christi volunteer and put her heart and soul into her lemonade stands each year, she also was a staunch organizer of blood drives for the American Red Cross. In fact, the blood drives she sponsored had such overwhelming turnouts they had to turn people away. During the blood drives Christi would hold hands, tell jokes and draw pictures to help queasy donors. Christ’s family is proud that her blood drives collected hundreds more pints than she ever needed herself.

Christine Shayna Thomas, our beloved and cherished daughter, passed away on September 19, 2006 at the tender age of 9. “She bravely fought with the strength of a soldier while maintaining the grace and beauty of a ballerina – teaching life’s lessons along the way.

Donate in Honor of Christi Today!