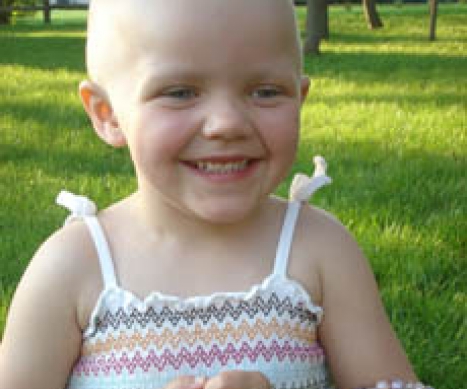 My husband Tim and I first experienced the immense love between parents and their child when our daughter Gracie was born on January 11, 2005. She was our first child and allowed us to experience all the amazing firsts of being a parent.

Gracie has always been funny and the type of kid that captures your heart. As her mom, I have always felt she was special and strong. I never imagined that we would face cancer with her - I guess no parent does.

A few months before Gracie's 3rd birthday, she began to limp slightly. I took her to the pediatrician thinking I was probably playing the overly cautious parent. The pediatrician thought maybe Gracie had sprained something while playing and instructed us to keep an eye on her. About a week later, the white of Gracie's eyes began to have yellow tint. I took her back to the pediatrician, who seemed a bit more concerned. We were sent for blood work and an ultrasound of Gracie's abdomen. The pediatrician's phone call the morning after the ultrasound revealed that Gracie had a tumor growing from her bile duct into her liver. The feelings that followed that phone call cannot be put into words.

We headed to the Children's Hospital of Philadelphia an hour later for tests. Gracie was diagnosed with Embryonal Rhabdomyosarcoma of the Biliary Tree, a rare soft tissue cancer that affects 250 children per year. Gracie would go through 46 weeks of chemotherapy and 6 weeks of proton radiation in her treatment plan. I am constantly amazed at how she handled her treatments, and am happy to report that she is happy and doing well.

We love our Gracie girl, and couldn't be more proud of her - she's our little hero! We are also so thankful for the opportunity to participate in the work of Alex's Lemonade Stand Foundation to raise money for cancer research!

Donate in Honor of Gracie Today!