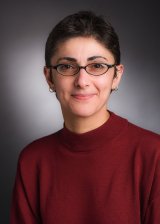 The balanced function of blood stem cells ensures normal production of blood cells. Individuals with germline mutations in the RUNX1 gene (RUNX1-FPD), have an increased lifetime risk of developing leukemias. Leukemia is a state of imbalance of stem cells that produce genetically identical abnormal cancerous cells instead of diverse normal blood cells. For leukemias to initiate in RUNX1-FPD, additional genetic abnormalities are required. Common secondary “hits” in leukemia in RUNX1-FPD are mutations in PHF6, a factor that affects the chromatin in the cells and their normal cell function. How germline RUNX1 mutations and acquired PHF6 mutations synergize to cause leukemia is not known. My hypothesis is that PHF6 mutations introduce changes in the chromatin structure of the RUNX1 mutant blood stem cells. This chromatin changes lead to abnormal blood cell function in ways that alters the balance of normal blood cell production towards more immature cancer-like cells. I want to study the exact mechanism of how this happens and how leukemia is initiated. Understanding the early stages of leukemia will present opportunities for novel therapies to prevent progression of preleukemic states in RUNX1-FPD.

To test my hypothesis, I propose to use a system I developed that allows introduction of mutations in blood cells while fluorescently labeling stem cells with various colors. We called this system TWISTR, like the game of colors. During normal hematopoiesis in this system, blood cells are multicolored reflecting their baseline diversity. Our model is ideal for studying expansion an abnormal mutant cell due to PHF6 mutations, leading to an imbalance of colors and emergence of a dominant color, as happens in leukemia. I will use cutting-edge approaches to study the effect of PHF6 mutations in this dominant colored cells to dissect the mechanisms by which the abnormal blood cells transform into leukemia. This approaches include looking at the chromatin structure in the cell, and the genes that are expressed in a different way in the mutant cells compared to normal ones. The goal would be to identify groups of genes and pathways that become abnormal in the presence of both RUNX1 and PHF6 mutations that lead to leukemia. Knowing which pathways are abnormal will allow to disrupt them with drugs or genetic interventions as a way stop the process of leukemia formation.

Co-funded by:
The RUNX1 Research Program