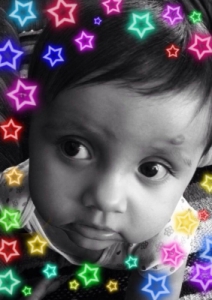 Haven is my granddaughter that I thought I would never have.  Both of her parents have health issues that were thought to highly decrease the chances of conception.  But God intervened and Haven was conceived.

Haven’s dad, Justin Lawson, had bilateral retinoblastoma as an infant.  It is passed on genetically so when my daughter, Nicole, found out she was pregnant, Justin was tested to find out if he carries the gene, and he does.  We were told there would be a 50-50 chance that Haven would be born with the disease.

At the age of 3 months Haven was diagnosed in Kansas City at Children’s Mercy Hospital.  Immediately chemotherapy was begun.  Haven was such a little trooper through the process.  Even at such a young age she always looked so brave, giving us grown-ups strength.  Haven received 6 treatments in Kansas City and then began going back for monthly exams.

Haven had 2 months of routine exams, where she was put to sleep and her eyes dilated and the tumors “lasered.”  At the end of the second post chemo treatment the doctor came out and asked to talk to the parents, the paternal grandmother and myself.  Dr. Desai told us that the tumors had returned aggressively and she could no longer be treated here in Kansas City and must go to New York City to see Dr. David Abramson.  Dr. Abramson is renowned in his field, in fact he developed the treatment that has helped Haven so much.

Her mother asked the doctor how bad Haven’s case was – the doctor said honestly he had seen much worse cases and also much less severe cases.  Dr. Abramson then followed up with the remark he really felt he could save Haven.

Dr. Abramson told them that Haven would be receiving a state of the art chemotherapy – inter-arterial chemo – which means they go through Haven’s groin to the back of the eyes and put the chemo on the tumors themselves.

Haven had 2 treatments of that chemo and after each treatment dramatic results were observed.  As usual, Haven was such a good patient and so strong.  After the first treatment she had a hold of her oxygen line and was holding it as if she knew she needed it.  All of the doctors and nurses fell in love with her.

When they went in November it was decided that she have another treatment.  Her blood counts were not high enough to have all 3 types of chemo that she had been having, so she only received 2.  It must have worked.   When she went back in January Dr. Abramson said “man it looks good in there, get out of here and come back in 6 weeks.”

At the next check up there was still no reoccurrence but Haven did have laser treatment.  The last check up she had once again was good and the doctors want to take out her port-a-cath.  In May Haven will once again travel and this time have an exam and an MRI to be sure that nothing has spread to the brain.

Alex’s Lemonade Stand Foundation has been generous to assist with paying for plane tickets for one of the parents to be able to travel to New York for the doctor visits.  The insurance company will only pay for one parent and it is so critical that they both be there - not only to support each other, but listen to the information from the doctors and also be there for Haven.

I wish you could meet Haven, she has an infectious smile and big personality.  If you are having a bad day, she will turn that around in a heartbeat.  She dances to music and is particular about her music, is working on learning Itsy Bitsy Spider and other rhymes.  She is sharp and loves to entertain you.  She will play peek-a-boo forever!

I am sure I sound very partial but Haven is special, a true gift from God.  I cannot thank Alex’s Lemonade Stand enough for their help, everyone we have come in contact with has been so caring, compassionate and helping.

I know there are families that have many more issues than we do however there are no words to express the gratitude we have for your organization and the help you have been to us and Haven. 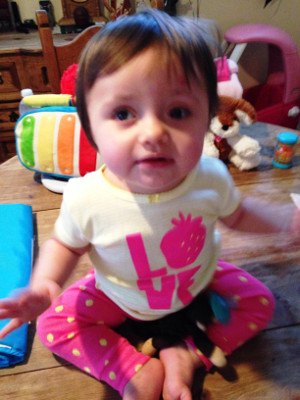