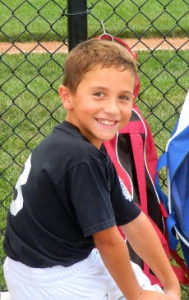 Living outside Washington, D.C., 9-year-old Taylor is a fan of the Redskins, Nationals, Capitals and the University of Maryland. He excels at sports, especially baseball. Funny, smart, determined and caring, he makes friends everywhere he goes.

Recently he was on the road a lot, as he and his mother traveled back and forth between Germantown, MD and Philadelphia while Taylor underwent six weeks of proton radiation treatment at the Perelman Center for Advanced Medicine at the University of Pennsylvania.

Taylor was experiencing severe, daily headaches which a CT scan revealed to be caused by a tumor larger than a tennis ball in his brain. He was diagnosed with Ependymoma Grade II and initially treated at a hospital close to home. He had surgery to remove the tumor there, and his family was advised against proton radiation to avoid side effects to an 8-year-old’s brain. But when an MRI a few months later showed evidence of regrowth, Taylor underwent a second surgery and proton radiation in Philadelphia.

Each week during treatment Taylor and his mother traveled to Philly for five days while his dad and sister stayed in Germantown so his dad could go to work and his sister to school. The costs of making at least two trips a week to and from Philadelphia and hotel costs in Philly all added up. The Travel For Care Program provided $2000 to Taylor’s family for their hotel. Taylor’s father said the assistance from Alex’s Lemonade Stand Foundation “dramatically decreased our financial burden.” He said, “To me, Alex's Lemonade Stand shows that there are many people out there who care about my child's well being and who understand what a cancer diagnosis means to a child and a family.”

Taylor completed treatment in March 2013. He is doing well, has returned to school and to playing baseball, and even started playing clarinet. He made the All Star Team for his baseball league and will be playing in the Maryland State Championship in July.

His parents want him to be able to continue playing baseball as long as it make him happy, go to college, fall in love, have a family, and most of all, live a long, full and happy life.

Quote from Taylor: “Going through what I have gone through proves to me that I can do anything I set my mind to, and so can all of the other kids who have had an ependymoma."