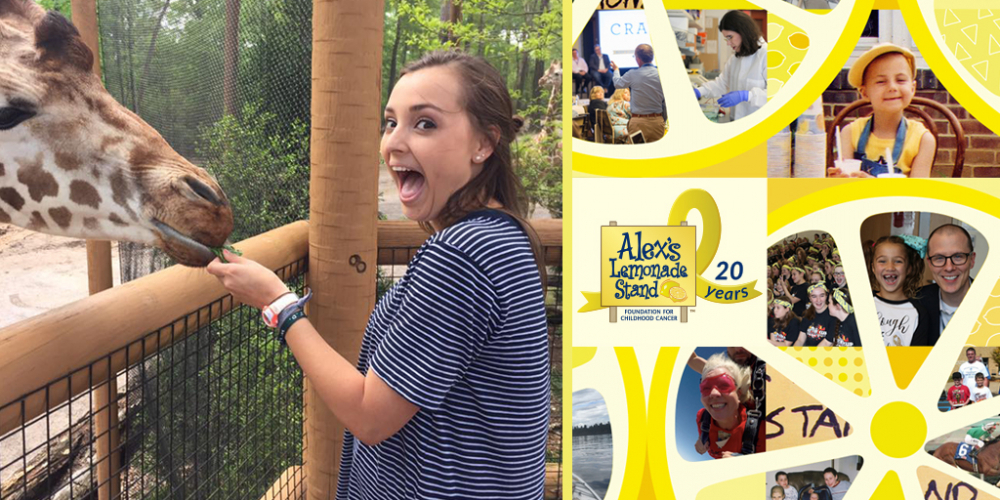 Taylor swam every day during the summer of 2006. She was 11 years old and loved competing on her local swim team. Her right shoulder started to bother her, but everyone assumed it was just sore, after all, Taylor had been swimming non-stop. Swim season ended and school started in September. But Taylor’s pain kept increasing. One day, the school nurse called Taylor’s mom, Tami, as Taylor said her arm was numb.

At the bone and joint clinic, X-rays revealed a mass. Taylor was sent to the hospital for more tests, an MRI, blood work, and to schedule a biopsy. They left the hospital, tried to be normal. Then they got the call from an oncologist: Taylor had osteosarcoma, the most common type of pediatric bone cancer. Taylor started treatment, right away.

“The first time it really hit me, I walked into clinic and realized all these kids did not have hair,” said Taylor.

Taylor weighed 89 pounds when she began chemotherapy; within a month, she was down to 67 pounds as a result of the chemo’s side effects. Next, Taylor had reconstructive surgery on her arm, removing her ball and socket joint, as well as part of her upper arm, replacing the joint and bones with prosthetics. Taylor missed most of 6th grade.

But, then treatment ended. Taylor was considered cancer-free and for 18 months she was back to her regular life. Then, another call from the school. Taylor could not catch her breath. She was 13 years old. The cancer was in her lung. Taylor had her lung removed but needed treatment to ensure that a relapse did not happen again. Dr. Nabil Ahmed reviewed Taylor’s case.

“What I saw on paper was a girl full of life,” said Dr. Ahmed.

Dr. Ahmed enrolled in a clinical trial at Texas Children's Hospital that was made possible by an infrastructure grant from Alex's Lemonade Stand Foundation. The trial, nicknamed HEROS (Her2 Osteosarcoma), used immunotherapy. Blood was drawn from Taylor, immune cells were separated, reprogrammed to attack cancer cells and then reintroduced to Taylor’s body.

Her family waited, desperate for a cure. The trial worked.

In 2012, Taylor was declared cancer-free. Now, 14 years after her diagnosis, Taylor remains cancer-free. She is a pediatric nurse in Alabama and just celebrated her 1-year wedding anniversary.

“There is no telling who I would be if I hadn’t gone through that,” said Taylor.