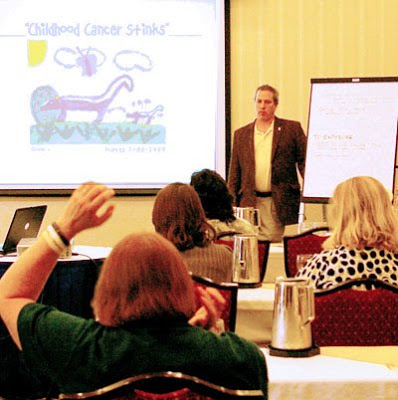 Jay Scott discussing how to build awareness of childhood cancer.
Alex’s Lemonade Stand Foundation for Childhood Cancer recently held our very first Symposium on childhood cancer. The day was a great success, and a learning experience for all involved. Below are two accounts from parents who attended the event.

I signed up for the Alex’s Lemonade Stand Foundation Childhood Cancer Symposium with some trepidation. After all, I no longer had a child in treatment, as my son Max had died in April of 2008, after a six and a half year battle with neuroblastoma. What could I possibly learn at such an event?

As it turns out…I learned quite a lot. The speakers were truly wonderful and offered a lot of important information and support. The discussions were lively, and for me, empowering. It had been a long time since I was someplace where there were other parents dealing with the issues that I had dealt with for so long. It was the first time I was with other parents who had lost their children to cancer. I learned that a lot of what I had been feeling was normal and that the difficult situations that I still encounter were faced by other parents. Guided by some terrific professionals, we shared our experiences and talked about what worked and what didn’t. Even during lunch, we were able to share our stories with one another.

It was a day well-spent with wonderful people and outstanding professionals who were able to guide us through the unique situations faced by parents of children with cancer. I am VERY thankful to ALSF for planning and executing such a wonderful event. I look forward to next year’s symposium! 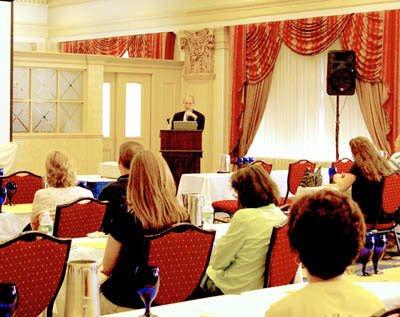 We recently had the pleasure of attending the Alex’s Lemonade Stand Foundation Symposium on childhood cancer. We took the train from Providence, the conductor remembered us from previous trips to Sloan Kettering when Sean was little. The Alex’s Lemonade shirts and hats may have given us away! We thought we would do some advertising and advocate for childhood cancer awareness on the ride.

I thought the Symposium was fantastic, I really enjoyed it. I learned more about PTSD (Posttraumatic stress disorder), which I definitely have and lots more about cancer past, present and future. It is always interesting to hear questions from other parents after the lectures. It was great to meet families that we had talked to online for years, but had never met. I also met many new families with kids with other types of cancer. 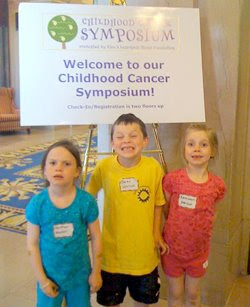 The kid’s room was great. They had Wii set up, legos, crafts of all kinds and a magic show. My kids did not want to leave. Everyone got to know one another and the kids played so nicely together. We sat with different folks at each meal and got to just spend some time chatting with other families.

Everyone got to stay up late enjoying more lemon Rita’s water ice, which we don’t have at home. In the morning we had breakfast with our new friends. Thanks to everyone at Alex’s for putting on such a fantastic symposium. It was their first and I was very impressed!