ALSF hosted our first special event of the year this past weekend, and The Lemon Ball 2011 did not disappoint! As this headline indicates, perhaps the most exciting moment of the evening came during the Live Auction, when the “Alex’s Heart Painting” incited a bidding war.

In years past, a plate of lemon cookies baked by Liz has been among the most popular live auction items. Though they certainly weren’t lacking this year (they sold for $6,000!), it was wonderful to see Alex’s beautiful painting take over their reign. As the last item in the live auction, the starting bid for Alex’s painting was $500. It didn’t stay that way for long as the amount quickly shot up, and before we knew it, two bidders were at war with the bids easily moving to over $10,000. With neither bidder giving up, the bids continued to increase until finally, the winning bid of $16,000 was reached. The painting had only been a part of the live auction one other year, and though it wasn’t a surprise that it would be a popular item, the painting hadn’t gone for more than $3,000 previously. In 2011, it was the largest grossing item in the Live Auction. What a sweet tribute and proof that Alex’s enduring legacy of hope lives on! 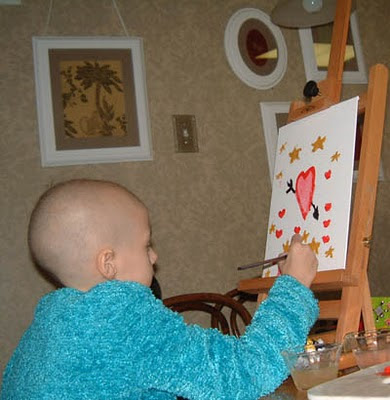 While this may have been one of the most exciting moments of the evening, there were many more of inspiration and hope throughout. Though we changed the venue to the Loews Philadelphia Hotel in 2011, the atmosphere remained the same as supporters of Alex’s mission came together to continue her dream – a cure for all kids with cancer. We were able to recognize some important individuals throughout the night including our Crystal Cup recipient – Jim Rudolph, our Volunteer of the Year – Shira Rosenwald, and our Stands Hosts of the Year – the Huscroft family.

We are pleased to report that the evening raised over $675,000 and saw over 800 attendees. The silent auction was more successful than in any year prior, and above all else, we were pleased to have some of our heroes and their families in attendance. The Lemon Ball is always a wonderful evening and a great way to kick off the year. We are looking forward to 2011, and we can officially say – let the fundraising begin!

A special thank you to Volvo, CIGNA, Toys“R”Us and all of our amazing sponsors of the evening!