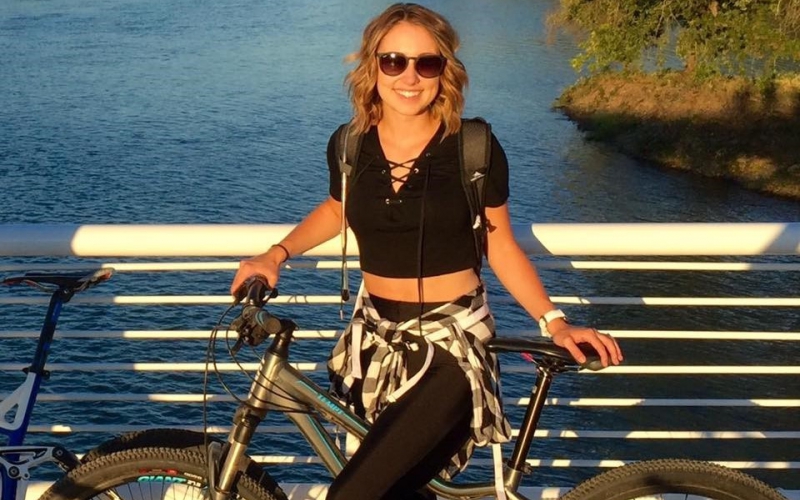 While working at a juice bar in college, Hailey Ford made fast friends with her co-worker, Dillan. Dillan was a high school student, a vibrant kid who loved life and would often go out with Hailey and other friends after work. A year after the pair became friends,  Dillan was diagnosed with leukemia. Five months later, in September, he was gone.

This opened Hailey’s eyes to the reality of childhood cancer and motivated her to do something to help.

This September, in Dillan’s memory, Hailey made the commitment to log 100 miles and raise more than $2,000 as a Gold Medal Miler during The Million Mile.

Hosted by Alex’s Lemonade Stand Foundation (ALSF), The Million Mile is the largest childhood cancer awareness challenge that funds researchers so they can find better treatments and more cures for kids battling cancer. Participants log as many active miles as possible all month long while raising money to help kids with cancer. The goal is to collectively move one million miles during the month of September.

Last year, Hailey was encouraged by a friend to participate for the first time. Hailey wanted to not only better the lives of children with cancer, but her own life as well.

“There is no better time than the present to not only show your support for a great cause like childhood cancer, but to also take a step in the right direction to better yourself and lead a healthier life,” Hailey said. She kept motivated by setting personal goals and seeing what her body could do. Even if some days it wasn’t so easy.

“Last year, I woke up every morning at 6 am and would run before I went into work,” said Hailey. “A lot of people have a hard time getting to the gym or waking up early to go for that morning run. I am a true testament to that because I hate waking up early! But this event gives extra purpose and meaning to what you are doing. You are changing lives with every step you take.”

This year, Hailey is going the extra mile in memory of Dillan and for all children battling cancer.

Hailey has plans to grow her team--The Match Play Million Milers--by inviting family, friends, colleagues and community members to a happy hour at a local restaurant at the end of August and recruiting them. In September, she’s holding two organized runs so that the whole team can come together to stay engaged, reach their goals and have some fun!

Hailey tells others joining The Million Mile to "find your incentive." Last year, her team consisted of co-workers who turned distance goals into a friendly competition. It felt great to lose weight, enjoy exercising, see who could run the most and do it all for a good cause. One morning, Hailey even rewarded her first five mile run with a yummy breakfast at her mom’s house!

“Being involved with a foundation like this is truly humbling,” Hailey said. “Although I can’t be the scientist in the lab trying to find the way to cure these kids, I will do my best to find every other way I can help.”

Join The Million Mile this September and become part of the movement to find cures for childhood cancer. Whether you walk, run, ride or a combination of all three, your miles and donations can add up to funds for innovative childhood cancer research. Ready to lace up your sneakers for kids with cancer?