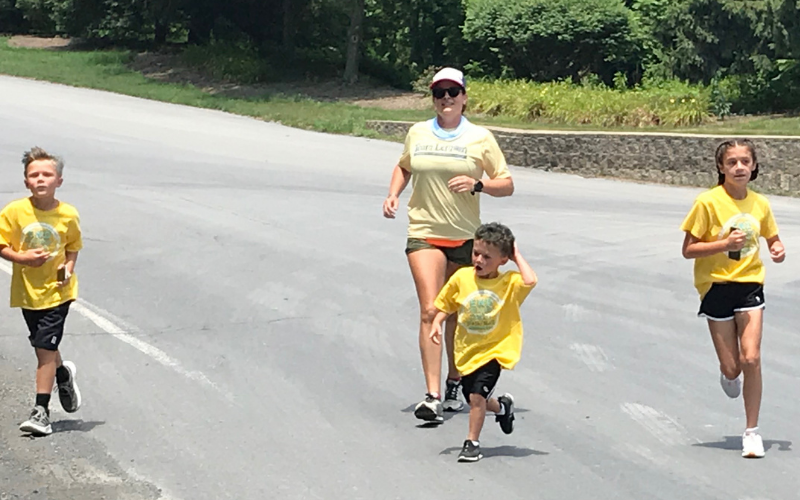 Team Lemon runner Maggie Seymour is greeted by the Wakeley family in Pennsylvania.

In terms of health, I grew up pretty lucky. My siblings and I were all healthy, borderline indestructible at times. We played rough, but I can’t ever remember going to the hospital for stitches or casts. I had terrible personal hygiene – I hated washing my hands and certainly avoided brushing my teeth at all costs – and yet I rarely missed school due to a flu or cough. When we did fall ill, my mother would make us tea and give us that awful tasting cough medicine (no bubble gum flavor for us).  She didn’t seem to fret or worry, she didn’t call the doctor incessantly or fuss over a stomachache – probably because she had three other devils running around to tend to.

When I relive these stories with my mom, she remembers it slightly differently, because she did worry, she still worries, and she will always worry about her children (and now grandchildren). It was just when it came to the physical health stuff, we didn’t need much protection, we were lucky that way.

I thought a lot about that as I trudged along the backroads of Pennsylvania last June. I was trying to cross my 18th state on foot, as part of my #RunFree50 challenge, raising money for Alex’s Lemonade Stand Foundation and supporting their mission of fighting childhood cancers and those families in the battle. I was struggling to keep any pace resembling running and wondering if I should just call the whole thing off – I had a good excuse after all, I had just found out that I was pregnant the week prior.

At seven weeks along, I told myself that quitting was probably the safest option, that maybe I was even being a bit selfish to carry on, like I wasn’t prioritizing my pregnancy the way I should. I felt like maybe I wasn’t doing everything I could to protect against a miscarriage.

But we can’t protect our children from all the harm in the world, not really, not completely, not in the way we would if possible. Pain, suffering, and harm comes to us all – no matter the barriers we have around us or the armor we’ve donned. Neither money, nor religion, nor race can protect us, or our children, from being hurt. The best we can do is prepare – a fact that parents of children fighting cancer know more acutely and more painfully than the rest of us. I thought about those parents as I shuffled along. I thought about the mothers and fathers quitting jobs to care for their children when they needed them the most. I thought of the parents going to work every day to keep their income and insurance when they’d rather be at home with their children when they needed it the most. I thought of all the hot teas and backrubs and doctors’ visits. The hopeful screenings during remissions, making sure to make your other children feel special and loved too, the guilt when we always fall short of where we think we should be. All the casseroles and cheerful upbeat social media posts, the sheer exhaustion facing these families every day. I thought of all the families I had known with kids who fought diseases and diagnoses with an endurance I’d never be able to replicate, no matter how many miles I logged.

I thought of how much I had taken my health for granted throughout my life and how many unnecessary risks I had willingly assumed during my youth. I thought about how much I worried my parents and how I wish there was more I could do to protect other parents from the feelings of helplessness, the twisted knots of anxiety and pain in their stomachs. I thought about how I might handle these battles if they became my own in a year, or two, or ten. What could I protect my child from? And what could I only prepare them for?

When I was 16, I had planned a trip to Chicago with a few of my friends to check out colleges. We would take the four-hour train ride in the morning, visit our top schools in the city, and be back that same night. The night before, one by one, my fellow high school juniors dropped out. When the last one called to tell me he couldn’t go, I begged my mom, crying to let me go on my own. As she tells it, she closed her eyes, asked God to protect me, and then let me go.

She and my father would do the same six year later as I left for Iraq, and then Afghanistan, and then Kuwait. They would say a prayer and send me off to study abroad, get my heart broken, run across the country, or fail miserably. They protected me when they could, prepared me when they couldn’t, and fought by side every step of the way. So that’s what I’ll try and do as well - protect, prepare, fight.

That’s all any of us can do after all.

Maggie Seymour, a Major in the US Marine Corps Reserve, is an avid ultra runner on a mission. She's a small-town Midwestern girl at heart who believes in the power of hard work, education, community, and carbs (if she stops by your town be sure to grab her a slice of pizza). In 2017 she ran across the nation to raise awareness and support for those who supported her during her military career. Now she’s setting out to run across the rest of the 50 states benefitting at variety of causes including Alex’s Lemonade Stand Foundation.

When Maggie is not running she's reading, working or trying to write the next great American novel.