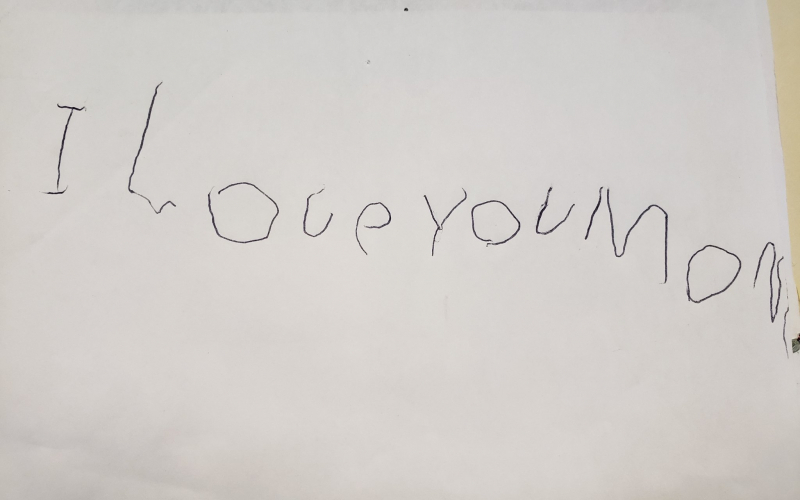 Pictured above, a note from ALSF founder, Alex Scott, to her mother. “You never know when a simple gesture will become a treasure to those you leave behind," said her mom Liz Scott

Liz Scott, mom to Alex’s Lemonade Stand Foundation (ALSF) founder Alex Scott, has a little love note that she cherishes. It simply says, “I love you, Mom,” in that sweet irregular handwriting that is the trademark of young kids. Alex wrote it for Liz when she was around 6 years old.

Throughout the years, ALSF supporters have shared love notes and also shared the love through their amazing support of children with cancer. In honor of this weekend that is all about sharing the love, here are four feel-good stories just in time for Valentine’s Day:

1.    Paul Dixon, who first became aware of ALSF through his employer, named his daughter (see below) Alexandra because of Alex’s story. His family celebrated their Alex’s first birthday with a fundraiser for ALSF.

“This warms my heart and reminds me that Alex’s life ripples in this world more than I can ever know,” says Liz Scott, Alex’s mom.

2.    The ALSF SuperSibs program gives siblings of children fighting cancer some special support and surprises. Our SuperSibs have also given incredible love and support to their siblings through their cancer diagnosis. Cass Butler was just 10 years old when her brother was diagnosed with childhood cancer. That experience changed the entire trajectory of her life. Today, Cass is a nurse on a COVID-19 unit. Since she works on the front lines of the pandemic, Cass is staying isolated from her siblings and parents to keep them safe.

Cass is also a SuperSibs ambassador for Alex’s Lemonade Stand Foundation (ALSF) and shares her story to raise awareness, fund research and provide support to other siblings, just like her.


3.    As Jalen Hurts was taking on his first season as a quarterback for Philadelphia Eagles, he was also building a relationship with a special family of fans. Jalen was introduced to childhood cancer hero Erick and his family through Alex's Lemonade Stand Foundation.

As they got to know each other, Jalen learned about the family's journey and struggles in fighting cancer during the COVID-19 pandemic.

Jalen wanted to show support for Erick and his family in a special way during the holiday season — and it became so much more for both the NFL quarterback and the family.

4.    Taylor was in 6th grade when she was first diagnosed with osteosarcoma. After 18 months of treatment, Taylor was cancer-free. That was until, suddenly, she couldn't catch her breath. An emergency scan revealed that Taylor's cancer had relapsed in her lung. Doctors removed the affected lung, but still, Taylor needed treatment to make sure she did not relapse again. Her family waited, desperate for a cure.

Dr. Nabil Ahmed enrolled Taylor in a clinical trial at Texas Children's Hospital that was made possible by an infrastructure grant from ALSF. The trial worked and Taylor was declared cancer-free. Now, 14 years after her diagnosis, Taylor remains cancer-free. She is a pediatric nurse in Alabama and just celebrated her 1-year wedding anniversary.