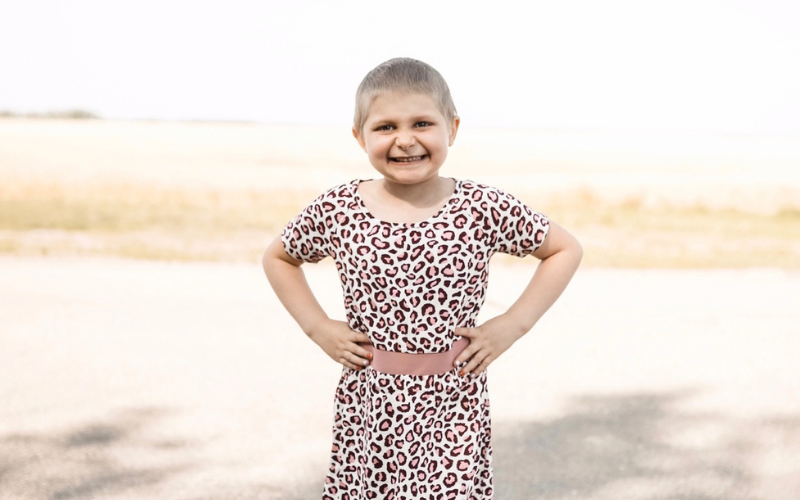 An ophthalmologist at the University of Minnesota Lions Children’s Eye Clinic ordered an MRI to see if they could find out why Elise was struggling to see out of her right eye. On January 5, 2018, they did. A mass was detected on her optic chiasm, and Elise was diagnosed with an optic nerve glioma – a brain tumor that grows where the eye connects to the brain.

Elise is just one of the 4,000 children under the age of 20 who are diagnosed with brain or spinal cord tumors in the United States each year. An optic nerve glioma is often a slow-growing cancer, but as it progresses it presses on the optic nerve, causing a child’s vision to worsen. In rare cases, this can result in blindness.

Elise was not going to let that happen without a fight. Bold and brave, she endured countless chemotherapy treatments six hours away in Minneapolis every other week. She even went on an experimental trial.

Unfortunately, her MRI in August of 2018 revealed that the tumor was still progressing. Her doctors switched her treatment plan to six weeks of daily radiation. This brought a new obstacle for Elise and her family, who didn’t know how they were going to make the next six weeks work when the University of Minnesota Masonic Children’s Hospital was six hours away.
With help from Alex’s Lemonade Stand Foundation’s (ALSF) Travel For Care program, they were able to stay near the hospital for the duration of Elise’s treatment, giving them much-needed peace of mind.

Elise’s feisty spirit kept her going through that following November, when extensive swelling caused her post-radiation MRI results to be inconclusive. Eventually the swelling subsided, but her repeat MRI revealed continued tumor growth.

In January 2020 she began chemotherapy again, paired with monthly MRIs that continued through August. This was especially difficult with the COVID-19 pandemic putting extra stress on Elise and her family.

Most recently, Elise, in her unwavering faith and strength, had to restart chemotherapy in February 2021 due to tumor progression. University of Minnesota Masonic Children’s Hospital has become like her second home.

Brain cancers are notoriously difficult to treat. Most don’t have an identifiable cause, which is why ALSF-funded researchers like Dr. Nicole Brossier, MD/PhD are studying the origins of cancers like optic nerve glioma. Dr. Brossier and her team are analyzing cells in the developing brain to identify the underlying causes of brain tumors. This research aims to determine how certain mutations and predispositions function as risk factors, in hopes to open the door for kids like Elise to receive more effective and less toxic treatment options.

ALSF proudly funds researchers to accelerate the discovery of cures for children with cancer. Cures will only come with research, and research only happens with help from supporters.

Today, Elise is 8 years old, bold and positive, but facing hardships no child should. She is still in need of a cure.

Through monthly donations to the One Cup at a Time Club, you can continue to give families like Elise’s the support they need. This month, ALSF plans to add a One Cup donor each day during the month of May – a donation of $5 or more a month from one person is enough to help a childhood cancer family travel to treatment each year.

Will you be our donor that joins today?