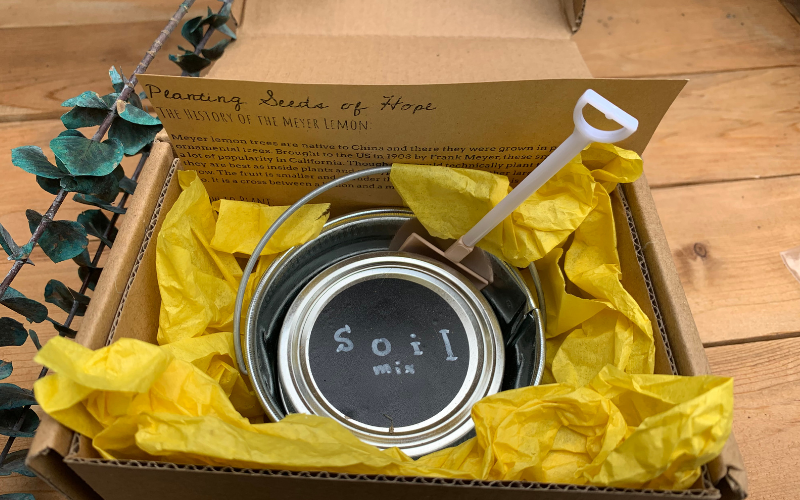 Throughout June, friends and family sent in their contributions, and out went Hanna’s carefully crafted kits, complete with detailed instructions.

When life handed Hanna lemons, she thought, “Why not plant more!” That’s the concept behind 13-year-old Hanna’s Bat Mitzvah project, “Planting Seeds of Hope,” which she started in summer 2021 to raise funds for Alex’s Lemonade Stand Foundation (ALSF).

“Just hearing stories about kids who battled childhood cancer like Alex Scott made me want to both spread kindness and awareness. It made me want to help others,” said Hanna. “This is my small way of starting somewhere.”

What started as the seed of an idea – helping kids with cancer – blossomed into something much sweeter.

Hanna built her own website to start, designing it to teach others about ALSF’s mission to fight childhood cancer. Then, anyone who donated to her fundraiser would receive a “Grow your own lemon tree” kit. Throughout June, friends and family sent in their contributions, and out went Hanna’s carefully crafted kits, complete with detailed instructions. For Hanna, the lemon seeds represent so much more than a fun project for anyone with a green thumb.

“My idea to create a ‘grow your own lemon tree’ kit was inspired by the hope that every time someone looks at that little tree, they will remember Alex, and other kids like Alex, and feel inspired to do something good in the world,” said Hanna.

For Hanna, every kit that went out all went back to what drew her to this cause in the first place: the strength and bravery of all kids fighting cancer. This was a concrete way for her to feel like she was truly making an impact for these kids. When her fundraiser concluded, she more than doubled her original $200 goal, raising enough to fund over a month of research.

“No matter how much it hurts or how scared they must be, they want to keep fighting. Not just for themselves, but for their families and for their friends,” said Hanna. “I realized that I hope to one day have as much courage as these kids do.

Since Founder Alex Scott’s first stand, kids helping kids has been at the core of ALSF’s mission. Hanna’s fundraiser exemplified that idea and taught her real lessons she can carry forward into the future.

“I learned that every small action and good intention can lead to real change and that no one should ever feel like they can’t make a difference,” said Hanna.

At ALSF, anyone of any age, can make a difference for kids with cancer by holding a fundraiser. Whether it’s a lemonade stand, a bake sale or any other creative idea like Hanna’s, holding an ALSF event is a perfect way to teach kids about giving back. Learn more about how to get involved with the fight against childhood cancer.