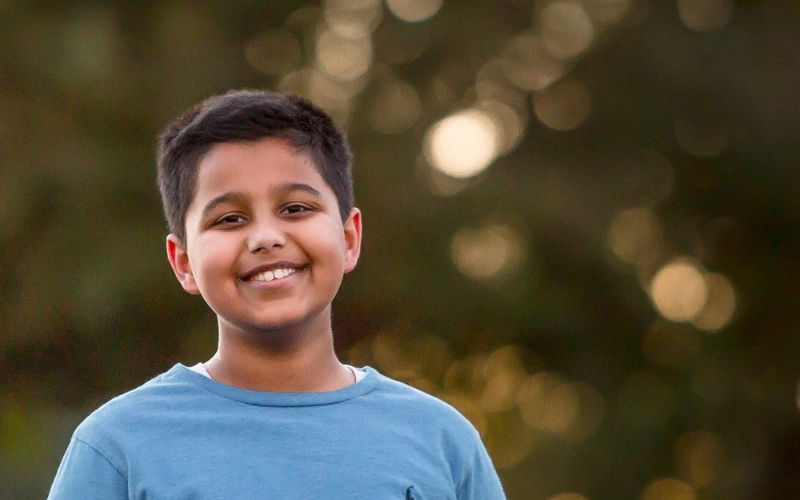 One of the very first questions families ask doctors after a childhood cancer diagnosis is, “What caused this disease?”

Unlike adult cancers, which are more likely driven by lifestyle or environmental factors, childhood cancers are not typically linked to either of these factors. Their cause remains mostly unknown — however, recent studies have shown that between 10-15% of all childhood cancers do have an underlying cause: a genetic predisposition to develop cancer.

Researchers know there are more than 100 different genetic syndromes that predispose children to develop cancer. One syndrome can lead to a rare pediatric cancer of the eye called retinoblastoma.

On her second day of life, Bernadette was diagnosed with retinoblastoma. Her family knew to look for the cancer, because her father had suffered from the same cancer 30 years earlier. Bernadette was treated and is now 5 years old. Since children with hereditary retinoblastoma are also genetically predisposed to secondary cancers such as pineal gland tumors, osteosarcomas, and melanoma, Bernadette continues to be monitored and followed by her oncology team.

For Bernadette’s family, the knowledge and understanding of the genetics of inherited retinoblastoma helped save her life. But for other families, the diagnosis of a predisposition syndrome comes after cancer is discovered.

Yash was just 4 years old when he began having rectal bleeding. Test after test led the family to a colonoscopy, which led to the discovery of colonic polyps and small bowel cancer.

When Yash was 8 years old, he was diagnosed with a rare childhood cancer predisposition syndrome called constitutional mismatch repair deficiency (CMMRD). Since that diagnosis, Yash has fought additional bowel cancers and a rare stomach cancer called ampullary cancer. There is no treatment, prevention or cure for CMMRD, so Yash continues with proactive monitoring, with the hope to catch early development of new cancers and treat them before they can progress.

One Alex’s Lemonade Stand Foundation-funded researcher, Jennifer Kalish, MD/PhD, is studying a cancer predisposition syndrome called Beckwith-Wiedemann Syndrome (BWS). BWS affects approximately one in 10,000 kids and is linked to increased risk of certain childhood cancers, including Wilms tumor and hepatoblastoma. With proper treatment and monitoring, these cancers are treatable, which makes it critical to properly identify kids with BWS. Other funded researchers are studying Familial RUNX-1, a predisposition syndrome that can lead to the development of certain types of leukemia.

You can help support research that can change the landscape of childhood cancer predisposition, surveillance and prevention by donating to Alex’s Lemonade Stand Foundation. Learn more.