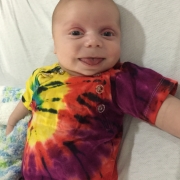 Finn Miller, aka “Fighting Finn” was born May 2, 2015. While Finn has not been able to leave the hospital since his birth, he is the happiest little boy! He loves to watch and listen to his big brother, Travis, when he comes to visit Finn in the hospital. Finn is feisty, which is parents say gives him the ability to fight cancer at only a few months old. Finn is always smiling and has a very happy disposition. His parents also joke that Finn loves to flirt with his caring nurses.

At birth, Finn was diagnosed with Beckwith Wiedemann Syndrome. He was born at CHOP in their special delivery unit due to an omphalocele, in which organs protrude out of the body, and pulmonary stenosis. Since his birth in May, Finn has been in the NICU. At two days old, Finn underwent heart surgery, and he continues to struggle with low blood sugars. On his two month birthday, Finn was diagnosed with hepatoblastoma. A week after his diagnosis, Finn underwent a liver resection and port placement to receive chemotherapy. During this surgery, the doctors also repaired Finn’s omphalocele and gave him a “custom” belly button.

Finn has now completed one cycle of chemotherapy and is beginning his second cycle. Finn’s parents cannot wait for the day that they are able to bring baby Finn home! In just three and a half months of life, Finn has overcome so much, and his parents know that his perseverance will allow him to accomplish anything he wants in life!

Finn’s life started out full of obstacles, and his parents are the first to tell you that Finn is the bravest little boy they know. Finn is truly a superhero and always has a smile on his face!