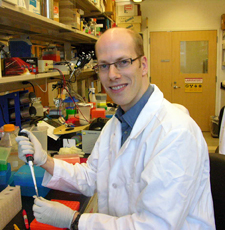 The past decades have witnessed major progress in the treatment of childhood cancers. However, the development of more effective therapy is delayed by our limited understanding of how these cancers develop. The p53 gene is mutated in many human cancers, including some of the types with the poorest survival rates in children, such as blood, brain and connective tissue cancers. Chromosomal abnormalities and excessively high levels of a protein called Mad2, which ensures that the chromosomes of cells are accurately segregated during cell division, are also common in childhood tumors. However, it is unknown to what extent these abnormalities are linked. I recently discovered that p53 prevents high levels of Mad2, which in turn prevents chromosomal abnormalities and tumor development. I propose to study the underlying molecular mechanism in more detail. This may open up new avenues for drug discovery to treat various types of childhood cancer. I will also use mice that develop tumors to see whether normalizing high levels of Mad2 reduces chromosomal abnormalities and tumor size. Finally, I will use childhood tumor samples that have been surgically removed from patients to see whether disrupted p53 function, high Mad2 levels and chromosomal abnormalities also correlate in human childhood tumors. Because efforts to restore p53 function directly in human tumors have only shown limited success, preventing abnormalities secondary to p53 malfunction may become an attractive alternative. Therefore, results from the experiments proposed here may ultimately contribute to developing more effective treatment for a broad range of cancers in children.

Through laboratory research at Memorial Sloan-Kettering Cancer Center in New York, NY, I have been working on better understanding chromosome missegregation in cancer. During normal cell divisions, cells duplicate their chromosomes and then segregate each duplicate chromosome complement to the newly-formed cells. Cancer cells, however, often missegregate their chromosomes during cell division. By doing so, they can acquire more malignant features, such as the ability to spread through the body or to become unresponsive to anti-cancer drugs. These features are also often observed in childhood cancers.

Importantly, the Young Investigator Award from Alex’s Lemonade Stand Foundation has allowed us to discover the following.

What do these observations mean? As mentioned above, the p53 gene is often mutated in childhood tumors. Therefore, cancer scientists and clinicians have been trying to reactivate p53 function in tumors for decades. However, this has remained difficult and their success has been limited. We find that, in the context of a mutated p53 gene in mice, normalization of Mad2 levels can alleviate tumor malignancy and reduce the development of lymphoma, the third most common cancer in children.

Along with previous observations from our laboratory, these findings are promising, because, in the future, we may be able to normalize Mad2 levels in childhood cancers. While this remains challenging, it is expected to prevent chromosome missegregation and, with that, reduce tumor malignancy and increase responsiveness to anti-cancer drugs. Alternatively, our observations may help us develop other new strategies to specifically eradicate tumor cells with abnormal chromosome numbers. Since reactivation of p53 function in tumors continues to be a major challenge, such approaches may become an attractive alternative. The support from Alex’s Lemonade Stand Foundation will allow us and other researchers and oncologists to develop such strategies and improve treatment options in order to eventually achieve our common goal: to eradicate childhood cancer.