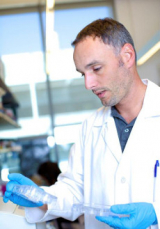 “As a young faculty, there are not too many opportunities for external funding where people trust you with a new ambitious project.”

Our initial studies were focused on the development of a model for osteosarcoma. At that time, several groups were developing genetically engineered mouse models for this bone cancer. Our idea was to develop a human model, starting from human mesenchymal stem cells and engineering them to activate cancer pathways known to be altered in the tumors of patients. The goal here was trying to use primary human cells (mesenchymal stem cells) and render them tumorigenic, which would allow us to study different stages of cancer initiation and progression.

We did find that loss of RB and/or p53 (two tumor suppressor genes) promoted the proliferation of mesenchymal stem cells. Unfortunately, towards the end of the funding period, when we were starting to make good progress, there was a shift in the field: what we thought were mesenchymal stem cells were not, new papers came out to say that previous groups had used the wrong markers to isolate these cells. So basically, we had been doing experiments with the wrong cells, misled by previous papers.

Unfortunately, we did not make enough progress to generate meaningful data for patients and their families. But several other groups have generated beautiful mouse models that are currently being used to investigate the mechanisms of tumorigenesis in the bones of children.

Because of our lack of meaningful data, we were not able to obtain additional funds to pursue the project. Instead, we switched to a different system to study the Rb and p53 tumor suppressors, cellular reprogramming.

How has funding from ALSF made a difference in what you have been able to do?

This was an amazing opportunity to start something new. As a young faculty, there are not too many opportunities for external funding where people trust you with a new ambitious project. While this specific project did not work out the way we wanted, it allowed my lab to develop novel approaches (such as lentiviral infections of human cells). It also allowed me to interact with the clinicians in my department, who gave me advice on the disease. Finally, this grant from the ALSF was important in my department and outside, it showed I could get grants and it showed that I was interested in pediatrics diseases.