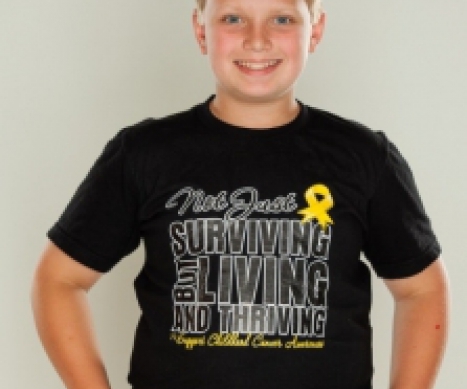 My son, Christopher, is a cancer survivor and this is his story. It is a very emotional story for my family. It is a story that has given my family purpose. Christopher was born with a rare form of cancer called infantile fibrosarcoma. Before Christopher, I had never heard of a child born with cancer. I didn’t even realize it was a possibility. All parents think their child is a blessing, but Christopher truly is. I didn’t understand what a gift it is to be a mother until I struggled to have a child of my own.

Christopher was not my first attempt at becoming a mother. I lost two babies to miscarriages before him. After the second, I finally convinced the doctors to test me for any problems that would cause complications. The tests showed that I have an autoimmune disease that contributed to the miscarriages. It was determined that I would have to take blood thinners while I was pregnant to keep from having another miscarriage. I had to give myself two injections of heparin every day for the entire pregnancy. As I reached my third trimester, the baby started to grow very rapidly and was beginning to get too big. My doctors decided to induce me four weeks prior to my due date. My induction lasted sixty-six hours. Finally on the night of March 14, 2003, Christopher was born. He weighed 8 pounds and was 20 inches long. Immediately after he was born the doctor noticed a tumor on his left foot. The doctor told me she thought the tumor was a hemangioma. The doctors told me the tumor would get smaller over time, but it continued to grow. My instincts told me that something wasn’t right.

When Christopher was two months old, I had his pediatrician send us to a general surgeon to have the tumor removed. At the appointment the surgeon examined Christopher’s foot then left the room. When he returned, he told me that he had made an appointment with an oncologist for us later that day. This, of course, made me nervous. I called my husband to take the rest of the day off so he could go with us to the appointment. The oncologist told us the tumor could be any number of things. He needed to get an MRI of Christopher’s foot to know more. The MRI came back inconclusive. The oncologist decided to schedule Christopher for surgery to take a biopsy of the tumor. The day of the surgery I was a nervous wreck. When it was time for him to go back to surgery, I handed him to the nurse and watched her carry my baby away. I refused to leave the hallway until they were out of sight. I was crying the entire time. The surgery only lasted about an hour, but I fidgeted the whole time. I didn’t calm down until he was out of surgery and they took us back to see him in recovery. A few days later we had an appointment with the oncologist to go over the results of the biopsy. He told us that the biopsy had come back inconclusive as well. Christopher was scheduled for another surgery, this time to remove the entire tumor.

Before Christopher was scheduled for his second surgery we met with the orthopedic surgeon. After he examined Christopher and reviewed the MRI results, he told us Christopher’s tumor was wrapped around the tendons and ligaments of his foot. This meant that he might have to cut those tissues to remove the tumor. Christopher could lose some, if not all, functions in his foot. My husband and I weighed the risks and decided to go ahead with the surgery. The day of the second surgery came, and just as before, I handed my baby to the nurse with tears in my eyes and watched her carry him away. When the surgery was over the doctor came out to talk to us. He had good news and bad news. The good news was the tumor came out without having to cut Christopher’s tendons or ligaments. The bad news was Christopher’s heart rate had dropped during the surgery. The surgical team was able to bring his heart rate back to normal, but he would have to stay in the pediatric ICU for the night. My heart sank when I realized I had come so close to losing another one of my children. My husband and I stayed with Christopher in the ICU that night. We were able to take him home the following day. It took about two weeks for the pathology results to come back on Christopher’s tumor. While we waited, my husband and I prepared ourselves for the worst and hoped for the best. When the doctor called us in to his office we could see the answer in his eyes. Our child had cancer.

Christopher started chemotherapy when he was only three months old. The doctors placed a port in his chest so they had continuous access for the chemotherapy and blood draws. Christopher had to endure weekly chemotherapy treatments for four months. Through those months of chemotherapy he lost what little hair he had, but he continued to thrive and remained healthy. He had his final surgery to remove the remaining piece of his tumor when he was fifteen months old. He has now been cancer free for eleven years!!!  He is a happy and healthy 12 year old boy. We continue to have him monitored annually for any long term side effects from his chemotherapy treatments.

You never know how strong you are until life hands you a difficult situation. I never thought something like this would happen to me or my family. Every day I hug Christopher and know how blessed I am to be his mother. Christopher’s cancer journey was not an easy one. I see the scars on his chest and foot and I am thankful that he doesn’t remember any of it. He is my hero. He beat cancer before he could even walk. Our story has a happy ending when so many others do not. I use this story to help advocate for childhood cancer. It is my dream that someday researchers will find a cure for cancer. I pray for a time when parents do not have to fear the words “your child has cancer.”

Information providing by the Fleming Family

Donate in Honor of Christopher Today!