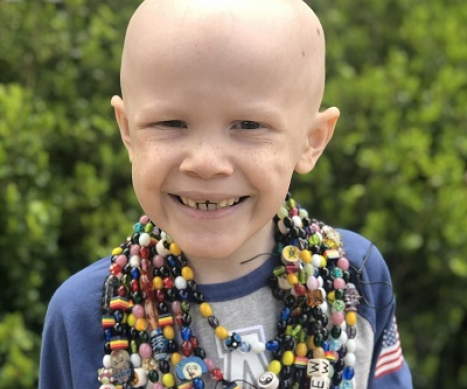 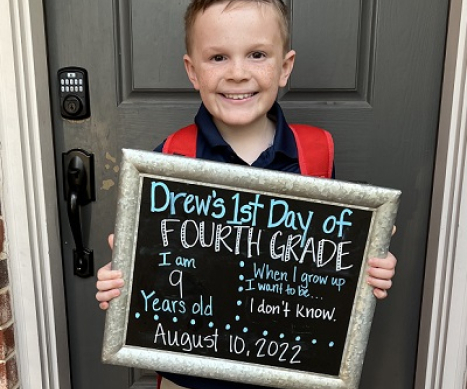 Drew is a witty and funny 9-year-old who always makes his family laugh. He loves LEGOs, going to the arcade, seeing movies, and having a boys’ night out with his dad.

In 2019, after a few weeks of Drew experiencing vague symptoms like fatigue, a fever, pain opening his mouth and pain in his leg, Drew’s family noticed a lump on the right side of his jaw. His mom, Emily, took him to the ER, where doctors found a five-centimeter tumor in his jaw. On May 10, Drew was diagnosed with stage 4 embryonal rhabdomyosarcoma, with primary site of the right jaw muscle and metastatic sites of his lungs, lymph nodes, spine, pelvis, and the long bones of his arms and legs.

Drew put on a tough face for his following 42 weeks of frontline chemotherapy and six weeks of proton radiation. He then had an additional week of proton radiation to his lumbar spine and right hip before starting six months of maintenance chemo. He and his family were ecstatic when his port was removed in February 2021.

Drew is his family’s hero because he rarely complained about his situation, and never asked “why me”. He took it all head-on. His frustration with having cancer is always short-lived, which has been a good lesson for Emily. His empathy and love for others is also inspiring.

Emily dreams that her son is not defined by his cancer and the limitations his treatment has caused. She prays that he gains confidence in himself and knows how amazing he is, and that he continues to have his witty and hilarious personality.

“This is the hardest thing ever,” said Emily about all families facing a childhood cancer diagnosis. “The only way is through – one day at a time.” And foundations like Alex’s Lemonade Stand Foundation give her hope that we are getting close to a cure!

“If you don’t know what to do, do something nice for someone else.” - Drew

Donate in Honor of Drew Today!