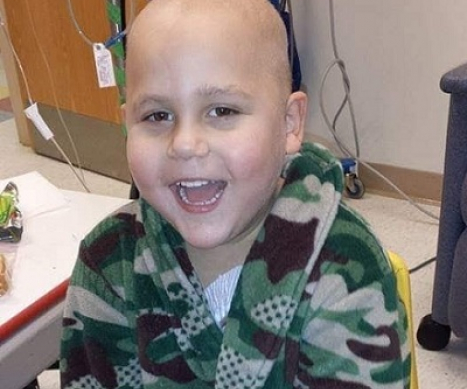 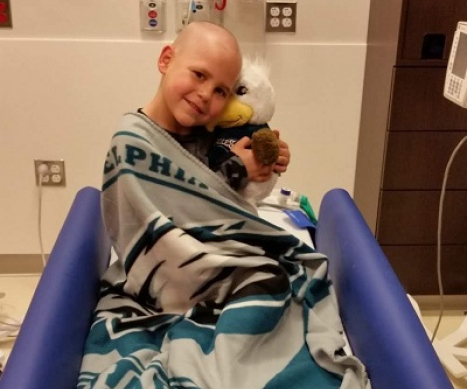 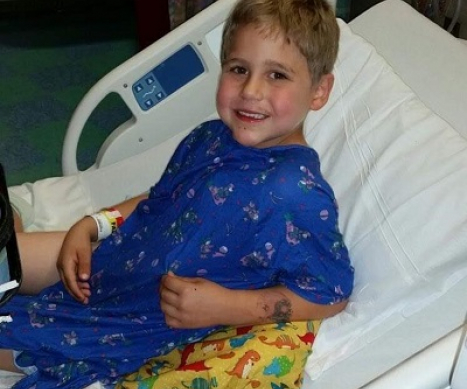 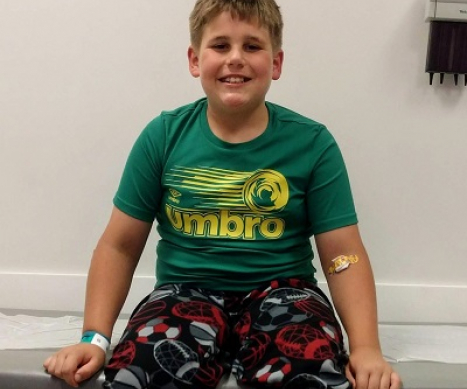 Dylan is quite the character. He has a great sense of humor and loves making people laugh. He can make new friends anywhere he goes and cares deeply for others. He has a unique and beautiful heart and soul. He loves singing and dancing, playing sports, riding bikes and scooters, and building things. One of his least favorite things to do is homework.

In December 2013, Dylan began feeling unusually tired. Doctors thought he had a bug or virus, but on Christmas Day, 3-year-old Dylan wouldn’t go downstairs to see what Santa left under the tree. His low-grade fever wouldn’t go away, so his parents took him back to the doctors the next day. His chest X-ray didn’t reveal anything. By New Year’s Eve, Dylan was still feverish and tired, so his mom, Ann, brought him in one more time, explaining that something was just not right. With a temperature of 101.3, Dylan’s pediatrician sent him to the local hospital that had a Children’s Hospital of Philadelphia (CHOP) satellite site. While there, he had his bloodwork looked at. The doctor was baffled that Dylan was sitting up, walking around, and even able to talk – his blood counts were lower than low.

By request of the doctor, Dylan was transferred to CHOP that night. They started tests with antibiotics to make sure this wasn’t bug or allergy-related. Dylan finally got some sleep in his hospital room while the ball dropped and people cheered for New Year’s in the hallway. And 10 minutes into the New Year, doctors told Dylan’s parents he had low-risk acute lymphoblastic leukemia (ALL).

On the oncology floor, Dylan received blood and platelet transfusions, a chest port and began chemotherapy. A week later, Dylan received more bad news – his samples that were sent to Johns Hopkins revealed that he had a mutated cell called iAmp21, which meant his ALL status was elevated to very high-risk. He started high-risk ALL induction treatments immediately after finishing the low-risk treatments, which lasted until June 2017.

In June 2020, Dylan will be celebrating three years off chemo and cancer-free!

One day, Dylan hopes to get the golden buzzer on America’s Got Talent and also become a police officer. His mom hopes that he stays in full remission and leads a healthy, happy life.

Dylan is his mom’s hero for so many reasons. One of the most important ones is because of his big heart and ability to care about others, even during his toughest treatments. He always had a smile on his face no matter what. He’s determined, never gives up and always keeps pushing, which is exactly the right attitude to have when dealing with his side effects from treatment. Dylan struggles with retaining information, reading, writing and calculating numbers, but he takes everything one day at a time and puts his all into tackling each hurdle.

Ann advises anyone facing a similar situation to learn to lean on others for support. She says, “Don’t be afraid or too proud to ask for help. Remember how you handle this is how your child will handle this. Stay positive and strong. Remember you are not alone in this battle. We are all here to support and help each other.”

Dylan’s family sees Alex’s Lemonade Stand Foundation (ALSF) as a huge part of that support. His sister, Danielle, is part of the SuperSibs program, and they believe every cup of lemonade brings hope and everyone closer to a cure for childhood cancer. The cure and less invasive versions of chemotherapy are out there, and ALSF is helping find those things.

Donate in Honor of Dylan Today!