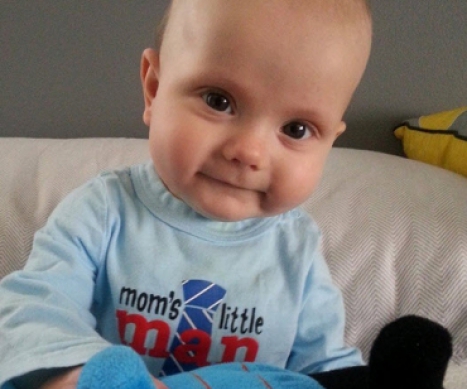 Hudson is one year old and he is just coming into his own personality. He is crawling and is getting into everything! He can clap and give high fives (which makes him giggle a lot) and say Momma, Dadda, and Bub (his awesome older brother Cohen).

When Hudson was only two months old, his mom was changing his diaper and noticed a bump on his abdomen. It was a weekend, but fortunately Hudson’s pediatrician is a family friend, so they were able to speak to her and see her quickly. Hudson’s parents figured the bump was a swollen gland or something and not a cause for real concern.

The pediatrician wasn't able to make a diagnosis, so she sent Hudson for an ultrasound. From the expression on the tech’s face, Hudson’s parents knew bad news was on its way. They were rushed off to the children’s hospital where Hudson met with the oncologist who was able to diagnose that he had cancer. He was admitted and endured a whirlwind of tests, tubes, needles and pokes. That's when genetic testing things were confirmed that two-month-old Hudson had Stage 4 Neuroblastoma. He had skin nodules, an 8x5x6 inch mass in his abdomen, and spots on his lungs, liver, and bone marrow. Since he was so young, his prognosis was good.

Hudson had 4 rounds of chemo to shrink the mass to become operable. It was a mild dose of chemo due to many different factors, Then he had an operation to remove the masses, which were stemming from both adrenal glands. The surgeon removed all of his left adrenal gland and part of his right and he got the margins.

Hudson handled treatment like a champ. Since he didn’t know anything different, he always had a smile on his face and laughter in his voice - through all the sticks, surgeries and chemo days. Even at just 11 months, he has shown such strength and is an amazing little boy.

Hudson’s family and friends are starting up the Lemon Society of Dayton to support ALSF and the fight against childhood cancer. The Dayton community has been very supportive of Hudson and everything he and his family are trying to achieve in Dayton, OH.

Donate in Honor of Hudson Today!