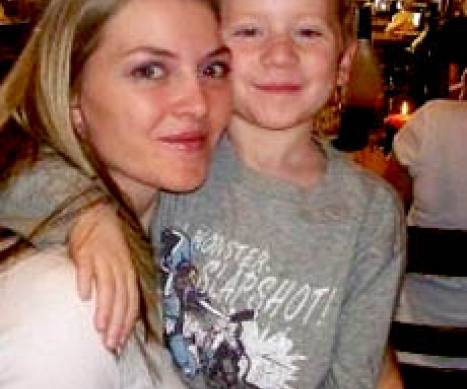 Jarad got very sick when he was just over a year old. He started out with a slight fever and diarrhea. The fever eventually went away, but the diarrhea continued for a couple of weeks, so we took him to the doctor. His doctor was convinced it was his diet and had my family change his fluid and food intake. This went on for 6 months. Finally, my mother’s friend told us that we should get a second opinion. We made an appointment at the Children’s Hospital of Philadelphia (CHOP). The moment the doctor walked in and saw Jarad, we were admitted. He said that there was definitely something going on. We ended up staying at the hospital for 10 days for multiple tests. On the 9th day, Jarad had a CT scan done and they saw a large mass in his abdomen. I was absolutely devastated by the news, but also completely in shock. The next day, we went home. We came back to CHOP September 3, 2002 for surgery to remove the tumor. Jarad was diagnosed with stage 3 neuroblastoma high risk.

The tumor was removed successfully, and Jarad was cancer free. He got a broviac just in case it was needed. On October 10, only a little over month after surgery, Jarad was admitted into CHOP for an infection in his broviac. It was during the 10 day stay that his doctor informed my family that the cancer had returned and was nearly the original size. That was just the beginning of our long journey. Jarad began chemotherapy in October and had 5 cycles, every month for 3-5 days inpatient. In December, the MIBG scans revealed that no more cancer could be detected. Even though this was great news I was still too scared to get excited. In February 2003, Jarad finished chemotherapy and then in March, he began his first stem cell transplant. After a month, he went home and then was admitted again in May for his second transplant. This one was harder than the first and Jarad got pretty sick. Finally, it was all over and he got to go home for good. No more chemo! Jarad did a couple weeks of radiation and was home free. He has been in remission for 7 years now. I am so thankful everyday for Jarad and could not imagine my life without him. He is my only child and what he went through inspired me to help people. I am currently in nursing school. After that, I think I will try for a brother or sister for him. I hope this story brings hope to families out there who are still fighting.

Donate in Honor of Jarad Today!