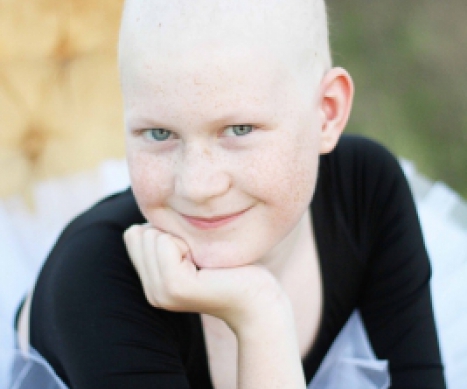 Peyton can be described as the perfect child. She was a healthy 8 lb 12oz red headed, blue eyed baby girl. After watching the Houston Ballet’s Nutcracker at the age of 3, Peyton looked at her mother and said that is what she wants to do – dance on stage in a beautiful tutu. Soon after, Peyton was enrolled in a local ballet studio and has loved ballet from that moment on.

Peyton started 7th grade like any normal 12-year-old. She was cheering for the middle school football team, dancing with her ballet company 5 to 6 days a week and busy rehearsing for her 7th season in the Sugar Land production of The Nutcracker. Life for Peyton and her family was normal.

After her Nutcracker performance, Peyton started experiencing extreme fatigue. Peyton is accustomed to being sore and tired and she and her parents believed the Christmas break would give her much needed rest from school and ballet. When school returned in January, Peyton’s fatigue continued. Her body felt sore. Peyton is usually the first one to wake, get ready for school, make her lunch and likes to be 15 minutes early to everything. That week, Peyton’s mother was waking her for school. That same week as Peyton prepared for ballet class, she stood in the bathroom adjusting her bun and did not want to go to her ballet class. Her mother, Carrie, felt something more than fatigue was the issue.

Two days later, her mother stayed to watch Peyton’s Saturday ballet class. She stood and watched in disbelief as Peyton could not complete a combination across the floor or get up en pointe in her ballet shoes. Four weeks earlier Peyton danced beautifully on stage and now she could barely dance at all.

Peyton’s mother contacted their pediatrician for an appointment immediately.

Upon initial examination, her pediatrician asked if Peyton was eating because she had lost quite a bit of weight in a very short time. While anorexia is common in the ballet world, Peyton’s mom immediately explained this was not the case. Dr. Bishop then felt Peyton’s liver and spleen, which were significantly enlarged. He also commented that she was paler than normal and immediately sent Peyton for blood work. Two hours later, Peyton was sent to the emergency room at Texas Children’s hospital on January 20, 2015.

Two days later, Peyton was diagnosed with High Risk Pre B acute lymphoblastic leukemia and the next day received chemotherapy for the first time. Peyton has received bone marrow biopsy, countless spinal taps, IV and oral chemotherapy drugs that took her beautiful red, curly hair. Peyton will continue her treatment for leukemia until 2017.

Peyton has not let her cancer diagnosis stop her from dancing. One of the first questions she asked, after asking if she would lose her hair, was “when can I go back to ballet?”

Two months to the day after her leukemia diagnosis, Peyton walked into her ballet studio, tied her pointe shoes and danced across the floor with the biggest smile on her sweet face. Peyton says ballet is harder than cancer. She says if you’ve ever danced on a pointe shoe you’ll understand why. Peyton is a shining example that through faith and determination, nothing, not even cancer, can stand in your way. Peyton continues to see the good in her cancer diagnosis. Through Alex’s Lemonade Stand Foundation, Peyton is directing funds towards leukemia research and grants. Leukemia is the most common form of childhood cancer and Peyton believes that through her own cancer diagnosis she can make difference in another child’s life. She is making lemonade out of her lemons!

Donate in Honor of Peyton Today!