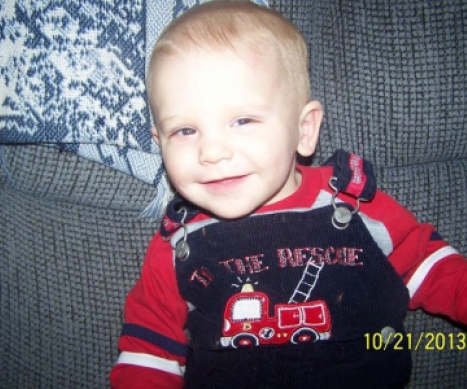 Ryker Wright was only eight months old when he was diagnosed with extrarenal malignant rhabdoid tumor, an aggressive and rare childhood cancer with a poor prognosis.

Ryker was born with congenital cataracts in both eyes and had surgery to remove them when he was one month old. A few weeks after his 2-month wellness checkup, his parents noticed a lump on his right hip. He was sent for an ultrasound and MRI but it wasn’t clear what it was, and it began to shrink. Months later it was barely noticeable, but it recurred around seven months, again following a well-baby check. The lump was biopsied, and Ryker’s parents got the devastating news that their baby had cancer.

Ryker went on an alternative medicine treatment which included an organic diet and light therapy. He was due to begin an aggressive chemotherapy treatment in December 2013 but unfortunately the cancer was too aggressive and he was not well enough to undergo the surgery for the central line. He had fluid in his lungs and around his heart. He and his family were sent home with hospice care and on December 15, 2013, at just nine months old, he passed away in his parents’ arms.

Ryker’s life was heartbreakingly short. He loved to listen to country music and watch the Kansas City Chiefs play football on Sundays with his daddy.

They write, “He taught us the true meaning of love. Our son will always be our hero.”

Quote: "A life that touched the lives of others lives on forever."

Donate in Honor of Ryker Today!