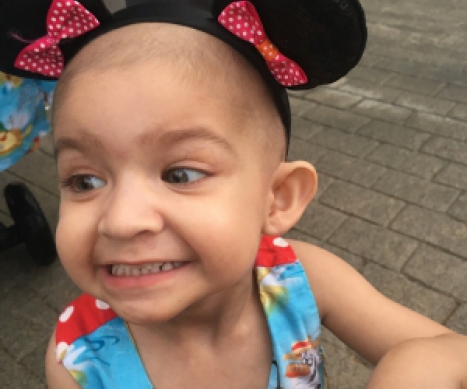 Summer had always been an easy-going kid since she was born in August 2014. She was always willing to go with the flow and minor stresses were quickly cured with a Mommy or Daddy cuddle. She loved all things Disney and she had a blast on her visit to Disney World in June 2016. Her favorite movies to watch while in the hospital were Pixar movies, especially Monsters Inc. Summer loved playing with puzzles, coloring, painting and especially ballroom dancing with her family. One Direction was her favorite band. She loved watching Dancing with the Stars. Summer took excellent care of her three doggies: Daisy, Buzz and Lilly. She enjoyed taking them on doggie walks, feeding them dinner and training them (by telling them to sit and giving them treats).

Summer's health had been pristine until the diagnosis. In March 2015, her parents noticed her abdomen felt oddly firm. While at the pediatrician’s office for her second dose of the flu vaccine a few days later, they asked the doctor to check it out. Summer was immediately sent for an ultrasound which found a mass. They went to Morgan Stanley Children's Hospital the next business day and Summer had a CT scan. It was confirmed that she had a 10 cm mass in her liver and there were signs that it had metastasized (mets) to her lungs as well. Her blood work didn't show signs of the abnormality usually found in the more common form of pediatric liver cancer. A surgery was set to get a biopsy, which indicated the cells were non-differentiated at that point.

Because Summer's cancer was classified as high risk, she was placed on a special trial protocol and portions of her biopsy were used in mouse models to test different chemotherapy options. After the first two rounds, scans revealed that the tumor had shrunk, but not enough to continue the altered protocol. She was then placed on a standard treatment protocol for hepatoblastoma. The tumor continued to respond to treatment and in July 2015 Summer had surgery to remove the mass in her liver. After the surgery, chemotherapy was continued in the hopes of eliminating the mets in her lungs without surgery. The following scan indicated that, while her liver appeared completely clean, the mets had spread in the lungs. The cells had matured into what appeared to be rhabdoid tumor. The chemotherapy plan changed and the next scan showed the drugs appeared to be working. In October the scan showed the mets as stable. The team worried that the chemo had stopped working (which commonly happens with rhabdoid tumors), so her family began to look into clinical trials and met with the Rhabdoid team in Boston that had a trial opening up.

Modifications were made to Summer's chemotherapy and the next few scans saw significant enough progress to operate on the mets. In February 2016, Summer had a stem cell collection and then surgery to remove the remaining visible mets. March 2016 was her auto stem cell transplant. In April 2016, she had 8 days of radiation and the end of treatment. Summer had her first CT scan on May 20, 2016 and there didn’t appear to be any signs of cancer.

In July 2016, Summer’s CT scan revealed that she had relapsed and she had a large tumor in her abdomen and new mets in her lungs. The team and Summer’s family decided that it was worthwhile to attempted to remove the abdominal tumor in a complicated 12 hour surgery, and they were successful. Unfortunately, the stress put on her body caused the lung masses to spread. Summer passed away at home in September 2016 after spending her final days surrounded by her family who adored her, her three doggies, and a constant stream of Mickey Mouse and Doc McStuffins.

Summer will always be Gina’s hero because all the statistics and data told them that Summer shouldn't have been given as much time as she had, but her 2 year old daughter was tougher than any adult she knows. Summer had two major surgeries, a butt-kicking stem cell transplant and high intensity chemo and always bounded back looking to play and find a way to be happy. Gina was able to remain strong through all of this because of the strength Summer demonstrated every single day.

Gina wants other families going through a similar situation to know, “It's going to be a long road, but the way I've been able to get through it is to look for the joy in every single day instead of constantly focusing on the uncertainties of the future.” It’s overwhelming for even the strongest person. You'll be surprised about how resilient children can be. They manage to show happiness and silliness even when they are feeling bad. Even on the lowest days, you should take comfort in the fact that just being there and comforting your child is helping them feel better. Even now that Summer is gone, she constantly thinks about all the happiness that Summer brought to her life. The two years they had together as a family were the hardest they have been through, but they were also the best and most fulfilling. They made every fight worth fighting.

Gina is involved with Team Lemon (Team Summer Strong). She says Alex's Lemonade Stand Foundation gives hope that people out there that want to improve the lives of children with pediatric cancer. Hope and love are the two most important things to have when a child in your family is fighting cancer. A child should never need to be on a waitlist for a hopeful and potentially lifesaving clinical trial. Children that are cured shouldn’t need to deal with lifelong complications from their treatments. Researchers studying childhood cancer are working to do better for these children, but there are still too many hurdles. When we fundraise and donate to Alex’s Lemonade Stand, we can help them overcome one of the most significant ones.

Donate in Honor of Summer Today!