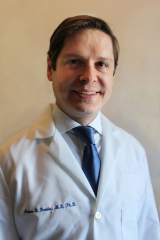 Background
Neuroblastoma (NB) is one of the most common solid tumors of childhood. Despite multimodality therapy, nearly half of patients with high-risk neuroblastoma will die of this disease. High-risk neuroblastoma typically has many DNA copies of the MYCN gene. I recently identified a group of six proteins which work together to form a network to drive neuroblastoma. Disrupting any one of these proteins causes all to be lost and the tumor cells to die. Unfortunately, there is no known way to target MYCN or these other proteins right now.

Project Goal
Here, I will perform experiments to identify new roles for uncharacterized RNAs that are likely to be involved in regulation of the network. Further, I will use chemical inhibitors to disrupt proteins that NB cells require for survival, several of which likely regulate these key factors. These new proteins will also be inhibited in animal models of human neuroblastoma, alone and in combination with drugs similar to those entering clinical trials for NB.

These studies aim to identify new levels of gene regulation and methods to inhibit the genes that establish the cell identity of NB, with minimal side effects.

Childhood cancers are generally believed to have fewer mutations when compared with adult cancers, with some childhood cancers driven by a single genetic mutation, such as the EWSR1/FLI1 fusion in Ewing sarcoma. In this study, the research team sought to establish that a lower mutational load in childhood cancers does not equal to a less complex genetic dependency. Genetic dependency when translated means the ability of a gene to make a cancer cell stay fit and not die providing a new approach to drug discovery. Rather than solely focusing on single, driver mutations, the team looked for other genes that cancer cells relied upon for survival that could serve as drug targets.

“This work provides a new baseline to understand what the genes that control the growth of pediatric solid tumors are,” said Dr. Durbin. “Lots more needs to be done, but this work provides a foundation on which we can build, to drive forward inroads into discovery of new targets in pediatric solid tumors. These, of course, are diseases for which we need new targets, to derive new treatments to benefit children with these diseases.”

The team ran a series of experiments where genes were individually turned off to assess which genes were essential for a tumor cell’s survival. These genes could represent new therapeutic opportunities. They screened 82 different pediatric cancer cell lines representing 13 types of solid tumor or brain tumor.

The findings from this study are highly significant because they highlight unique druggable targets for pediatric cancers.  Adam Durbin and his team through the use of this DepMap analysis recently interrogated the dependency between EP300 and CBP and in his recent study published in Cancer Discovery. They were able to show that pediatric NB depends on EP300 with CBP playing a very limited role. The team developed and validated a EP300 targeted drug “JQAD1” for NB in this study.

This study created a first-generation pediatric cancer dependency map that is available for download through the DepMap Portal.