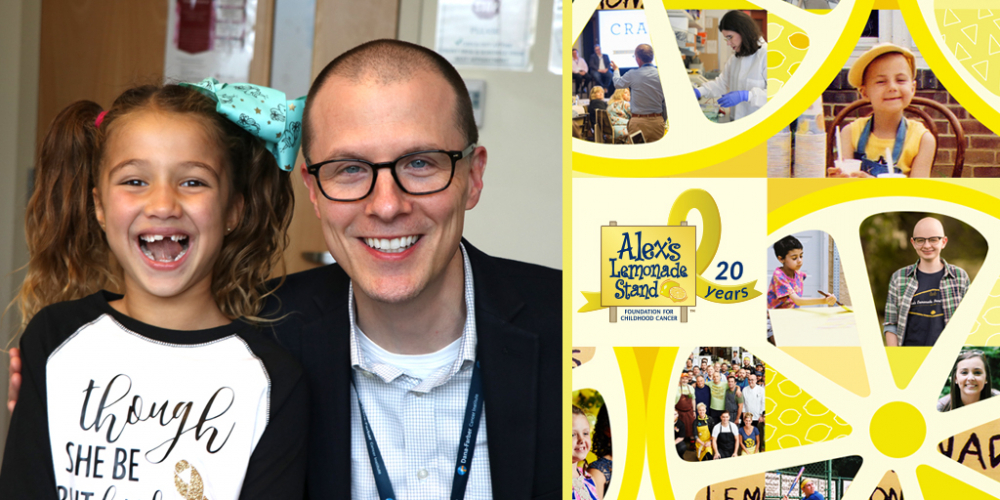 In 2016, Lakelynn was just 3 years old when she diagnosed with a rare sarcoma intermeshed in the nerves of her right arm. The pain caused by the tumor was so intense that Lakelynn could not move her arm at all. She’d spend hours a day crying in pain.

“Our doctors told us that the tumor was inoperable. Radiation was too dangerous. There was not a standard chemotherapy protocol,” said Leslie, Lakelynn’s mother.

At the urging of their local oncologist, Lakelynn’s parents, Leslie and Mike, had an RNA sequencing test performed on a portion of the tumor. That result revealed a rare mutation called the NTRK fusion.

This test gave the family one option: a clinical trial at Dana-Farber Cancer Institute being funded by Alex’s Lemonade Stand Foundation (ALSF) and led by Dr. Steven Dubois. The trial was for a drug called larotrectinib, which had shown promise for kids battling cancer that expressed the NTRK fusion.

These landmark results led to the FDA approval of larotrectinib in December 2018. Less than a year later in August 2019, the FDA approved another drug that treats pediatric cancer with the NTRK fusion: entrectinib. This drug was initially studied at four ALSF-funded institutions — Children’s Hospital of Philadelphia (CHOP), Dana-Farber Cancer Institute, University of California San Francisco and Baylor College of Medicine.

In the past ten years, less than 30 new drugs have been approved by the FDA for pediatric oncology applications. ALSF supported the research that led to the approval of at least nine of these new drug therapies.

“All of us have seen patients lose their struggle with cancer. And that’s not okay. The status quo is not acceptable,” said Dr. Dubois.

FDA approvals open the door for more expanded use of approved drugs, but that does not mean research and study of these therapies stops. Lakelynn, now 7 years old, continues on the larotectinib trial with Dr. Dubois. Her tumor remains stable, but not gone.

“Research is not only saving my daughter’s life, but it is giving her a childhood full of school and playgrounds and laughs and smiles. But her story isn't finished yet. Lakelynn's tumor has shrunk, but she still needs a treatment option that can make her cancer-free,” said Leslie.