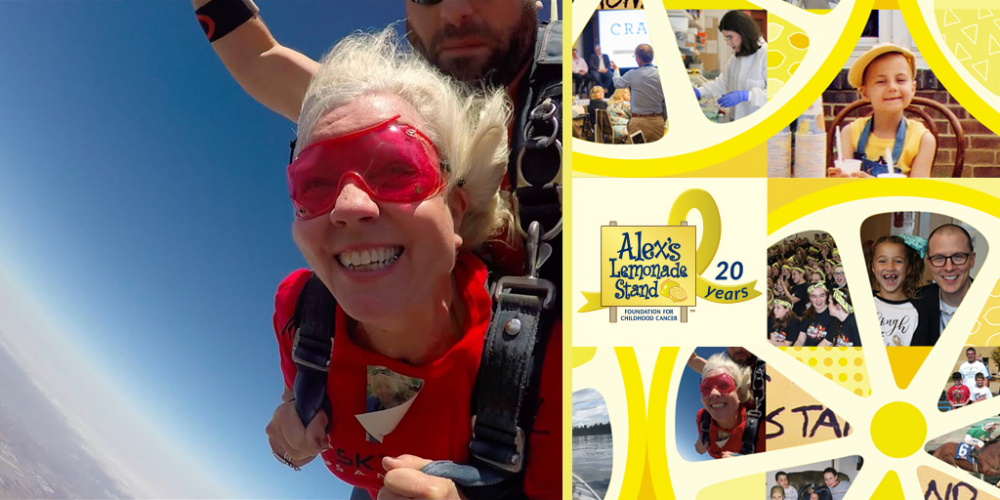 Skydiving was not something 70-year-old Rebecca Byrom had on her bucket list. In fact, her friends and family knew she was terrified of flying. But that’s exactly why she did it.

Her grandson Alex had been diagnosed with osteosarcoma in 2016. His battle was difficult to watch, riddled with endless scans, surgeries and more bad news after another. Rebecca, affectionately called Grandma Bee by her grandkids, wanted to honor Alex’s courage in the face of adversity, and the sky was the limit.

Pinning a picture of Alex to her shirt, Grandma Bee, along with her husband, Tom, jumped out of an airplane above San Diego on July 22, 2017 to raise funds for cures for pediatric cancer.

“I am a very risk-averse person, not prone to crazy or impulsive acts,” said Grandma Bee. “But I was absolutely determined to make the dive for my grandson, and once I got on the plane, I was not afraid… I cannot explain it, but I just felt calm and knew I could do it.”

Grandma Bee set a goal of raising $4,000 for Alex’s Lemonade Stand Foundation (ALSF). She free-fell into over $33,000 – more than she’d raised with her previous garage sales and garden craft workshops combined.

Few things compare to rocketing through the air at 120 miles per hour from 14,000 feet high, but Grandma Bee holds onto an even more important memory from that time.

Alex’s condition stabilized in the months following the dive, but eventually worsened. Out of the blue one day, just before Thanksgiving in 2018, Grandma Bee received a text from Alex that said, “Hey Grandma, I was wondering if you want to make cookies or something sometime this week at your house. Let me know! Maybe gingerbread or sugar cookies?” Baking was a popular pastime for them before Alex’s diagnosis, and he came over the very next day to bake gingerbread cookies, eat his favorite lunch and watch a little TV.

“It was very unusual for Alex to send me a text… he had never asked to do anything like that during his illness,” Grandma Bee reflected. “I realized a little later, this was his final gift to me… his good-bye.”

That Thanksgiving, doctors discovered a new brain tumor. Alex passed away on December 1, 2018 surrounded by his family.

Grandma Bee talks about Alex often, how he was keenly aware of others’ needs and a compassionate, joyful kid. She thought he was similar to Alex Scott in this way. They were both kind and generous, thinking of others before themselves. Grandma Bee decided to adopt the same way of thinking when she lost her only daughter, Cynthia, to a car accident in December of 1995. She trained to become a grief counselor for bereaved parents since she knew the pain of losing a child.

“One thing bereaved parents will always say is that they want their child remembered,” shared Grandma Bee. “I am happy to be able to continue sharing the story of my Alex.”

Today, she and her husband continue to raise awareness of the importance of childhood cancer research, because cures will not happen without the proper effort and funding. Grandma Bee still believes that cures are possible, we just need the will to take the leap.