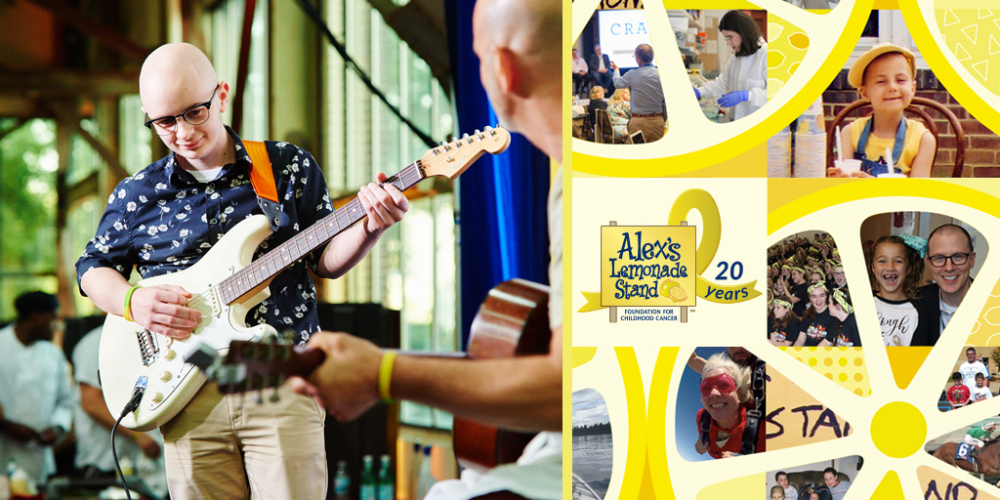 Eli was not a normal kid. He was extraordinary.

Music ran through his veins. He was a brilliant musician, played guitar, drums, bass and keyboard, and was artistic to his core. He carried around a sketchbook and cooked up unique fare for his family to try, but he was most in his element when rocking out on stage. He had an eclectic style, passionate opinions, and a mature sense of humor.

He also had childhood cancer.

At 4 years old, Eli couldn’t start pre-kindergarten because he had been diagnosed with neuroblastoma the month before. After nearly a year of high dose chemotherapy, a stem cell transplant and radiation, he relapsed and the cycle began all over again. However, this time, he was not getting the results he needed. There wasn’t much else their local children’s hospital could do.

Desperate for options, Eli’s parents attended a neuroblastoma conference. Luckily, they learned of a promising treatment plan at Children’s Hospital of Philadelphia – 1,200 miles from their home in Little Rock, Arkansas. Their already financially-demanding situation was about to get a whole lot more expensive.

That’s when they received an email from Alex’s Lemonade Stand Foundation (ALSF). Eli’s family was no stranger to ALSF. When Eli was first diagnosed, they held a lemonade stand in support of Alex and all kids with cancer. Little did they know the amount of support Eli would be receiving from ALSF in the years to come.

“They reached out to us and said that they’re going to start this Travel For Care fund,” recalled Dawn, Eli’s mom. “’We know that you're coming back and forth, we want to be able to help you. Would you guys be willing to participate in this new program?’ And we were like, ‘absolutely.’”

Eli’s new treatment schedule sent him to and from Philadelphia as many as 57 times. The Travel For Care program ensured Eli didn’t miss a single appointment, and got them through every unexpected emergency. One night, they were supposed to fly home from Philadelphia but were stranded in Chicago because of bad weather.

“I only had $12 in my pocket,” explained Dawn, “And they weren’t going to fly us out until tomorrow. What was I going to do with a 5, 6-year-old kid who's had chemo and just come from treatment and our only option was to sleep in an airport?”

One call to ALSF and Eli and his family were placed in a nearby hotel with free breakfast and a shuttle from the airport.

“They took the time to consider all of the little details,” continued Dawn. “It wasn’t cut and dry like ‘Okay, we’ll book you a hotel.’ There was careful consideration to everything that went along with it, because they understand that it’s not just booking a hotel. It’s incredibly personal.”

Eli was excited to be able to get to each of his treatments – it meant he was changing the future of childhood cancer.

“He understood the importance of clinical trials; he realized that what he was experiencing and what he was going through would help somebody else,” said Dawn. “Because of all the work he did, we’re closer to safer treatments and actual cures.”

Without Travel For Care, Dawn doesn’t think he would have had this opportunity.

Eventually, Eli and his family went from gas cards and hotel stays to living in Philadelphia to be closer to his treatments. They were excited at the prospect of being in the same city as the Foundation that had supported them for so long. Eli soon got his first job working at ALSF, sharing his passion for raising awareness about the disease he was fighting just as Alex had done.

Sadly, on October 24, 2019, Eli passed away at 18 years old. His legacy lives on though, both through a Foundation his family plans to start that will bring the gift of music to kids in treatment, and through his impact on research into more cures for kids in the future.

“I think we will see cures for childhood cancer in my lifetime,” Dawn shared, attributing that belief to the work both ALSF and Eli have done. “Had it not been for the trials that ALSF helped fund, and the ones they continue to help fund, we wouldn't have had our son for as long as we did. It is a huge honor to have been even a small part of what they've done.”

Many kids who similarly relapse like Eli can’t get the treatment they need at their home hospitals. Travel is necessary, and whether a family can afford to travel or stay in a hotel should never be the factor that keeps a child from treatment that could save their life. Because of the people and programs that supported Eli’s continuing treatment, he was able to have a great quality of life and live 12 years longer than his family thought he would.

“He was able to finish high school and, play in a band and record his own music,” said Dawn. “And we were able to see him grow into the young man that he would become… had it not been for the Travel For Care program that got him to the treatment that he needed, we, we wouldn't have had that. He wouldn't have been able to play guitar at sister's wedding or find out that he was going to be an uncle or perform in a band on stage. There were so many life experiences that we wouldn't have been able to have had we not been able to travel back and forth for his treatment. We were given more than we were ever promised.”