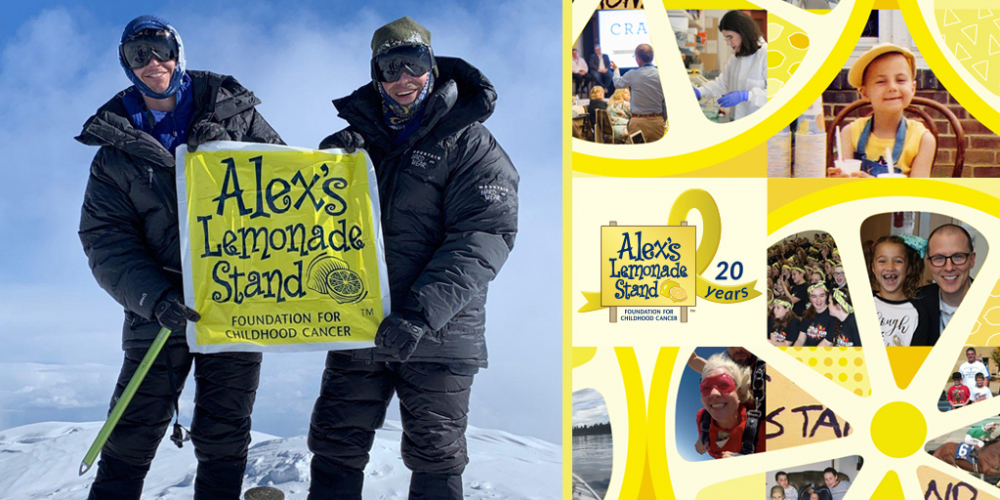 Years ago, before he was a financial advisor at Northwestern Mutual, Jeff Zorn loved playing brisk, competitive sports. When they became taxing on his body, he discovered his love of hiking, which quickly escalated into scaling taller peaks.

As he climbed, so did his aspirations. “I love to climb mountains with my kids. I wanted to start tying it all to something bigger than myself,” Jeff said.

Jeff was no stranger to childhood cancer. On family vacation one year, his 9-year-old daughter’s appendix ruptured due to a carcinoid tumor. Luckily, it was removed, and she has been able to climb mountains with him ever since.

At the same time, Jeff began working at Northwestern Mutual which introduced him to Alex’s Lemonade Stand Foundation and offered to match every employee donation to his cause. His charity was chosen. But he still needed a mountain.

In the past, Jeff had summited the likes of Mount Rainier, Kilimanjaro and Aconcagua, the largest mountain in the Americas. He figured he could only go up from here, and so in May 2019 he traveled north with his son, Justin, to conquer the highest peak in North America: Denali. It’s elevation: 20,310 feet. Jeff adopted that number as his fundraising goal – a dollar for every step up the mountain.

“It’s hard to even imagine how hard something like Denali is going to be,” Jeff reflected. He trained every day for months leading up to the behemoth, carrying 40-pound salt bags on his back and adjusting to altitude in the Rockies to prepare himself for the long, cold days and nights ahead.

In their 16-day climb, Jeff raised awareness and thousands for childhood cancer research. Many people would call what he did impossible. But Jeff believes otherwise.

“The compulsion to climb is in all of us, I think,” Jeff shared. “Even from infancy, everybody tries to get out of their crib. Fear is kind of learned. When I climbed Denali, it was so difficult to give myself permission to fail for fear of embarrassment, but that relieved all of the pressure.”

This is the same advice he gives anyone considering holding a fundraiser, no matter how extreme.

“Even if you’re afraid of failing, make the decision to show up anyway,” he said. “That’s where growing occurs. Every step of the way there will be obstacles and things that just kinda get in the way, but you always have to be willing to take the next step.”

He even applies this to his view on pediatric cancer. Jeff still believes cures are possible, but he knows it’s not all going to happen at once. “Childhood cancer is a thousand different things, so I think it's going to be a matter of tackling one thing at a time,” he said. “We’ll continue to chip away at it.” Like taking steps up a mountain.