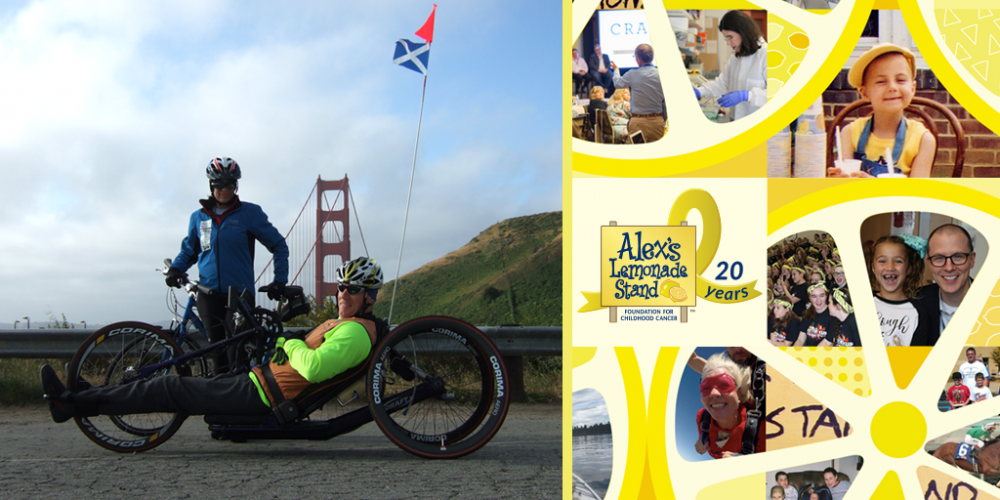 Some people would let the physical trauma from an accident emotionally and mentally stop them in their tracks – and for good reason. But those people are not Kenny Herriot. Even though a motorcycle accident left him paralyzed from the waist down, Kenny was determined to have an optimistic mindset, pick himself up again and move on – literally.

He wanted some good to come from his accident, so Kenny (who lives in the U.K.) started wheelchair racing in the early 2000’s. People heard about Kenny and he soon had a huge following. Before he knew it, a friend asked him to compete in hand cycling and Kenny found himself in the position to change the lives of others for the better.

Already supported by sponsors, Kenny decided to cycle across America in 2009. In preparation, he researched charities in the US to fundraise for and knew ALSF was the one. “When I saw Alex’s story, I thought it was incredible,” said Kenny. “Alex believed in herself and she knew she could do it and so did I.”

By then, Kenny had already cycled all of Great Britain and completed mountain challenges in South Africa. How hard could America be? So, he set out for San Francisco and continued straight through the middle of the country to his final destination on Long Island, NY. Along the way, Kenny hit some bumps in the road, including the unbelievable bad luck of getting struck by a car.

“The car hit the wheel of my cycle from behind at 60 miles per hour,” said Kenny. “If it hadn’t been for ALSF, I would have stopped right there.” But Kenny did not stop. In fact, he found a local repair shop to weld the bike back together and was on his way within five hours!

With some scratches and bruises of his own, Kenny pushed through another 1,200 miles. In total, he cycled 3,625 miles over the course of six weeks (averaging 83 miles a day), pedaled through 17 states, replaced nine tires and raised tens of thousands of dollars for ALSF.