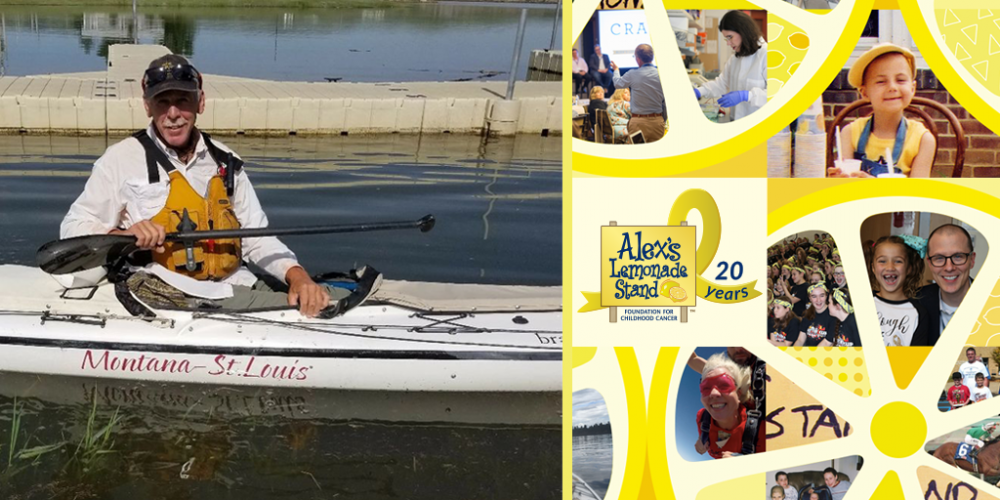 To Jim Emanuel, it’s his idea of a good time, or at least, the culmination of a lifelong passion. Rafting flows through his family’s blood, having spent nearly a half-century traversing different waterways in the U.S. Jim didn’t intend his Odyssian journey from Montana to the mouth of the Mississippi to be charitable, but enough people asked him about it and he decided to transform his adventure into a philanthropic opportunity. He picked the cause, childhood cancer, for a simple reason:

“Children are naturally friendly, honest, genuine and truthful. All the qualities that cancer isn’t,” said Jim. “After talking with the people at Alex’s Lemonade Stand Foundation (ALSF) I knew I had found a good partner for this trip.”

The trip itself: a cascading experience over the course of four months that brought Jim a wealth of memories, new friends and a whole lot of sunscreen. A journey like this may seem isolating, but Jim had three loyal traveling companions who greeted him every morning.

He taped pictures of three girls - Alex Scott, (founder of ALSF) Rebecca (his niece who lost her battle to cancer) and Amy (a family friend and cancer survivor) to the front of his canoe.

“Every morning I would break camp, get in the boat to start to paddle and touch each picture with my paddle,” said Jim. “I’d say good morning to each of them by name...these girls were really inspirational.”

Their companionship kept Jim company, along with the many “river angels” he met on his way down to Louisiana. These “river angels” would invite Jim into their homes for a warm meal, comfortable bed or occasionally rides into town for supplies. He took every opportunity to educate them about ALSF as well.

Jim doesn’t like asking people for money, so he wanted to ensure that if it was going to be a canoe trip for charity, the money he collected was going where it should. Alex’s story was the inspirational spark he needed. Through whirlpools on the Mississippi and frequent macaroni and cheese diets, Alex and the girls kept things in perspective for him through the whole journey.

When it was all over, Jim raised nearly $13,000 for ALSF. Not too shabby for someone who didn’t even plan on fundraising at the outset.

While Jim knew this would certainly test his physical and mental stamina, “it’s still nothing compared to battling cancer,” he said.