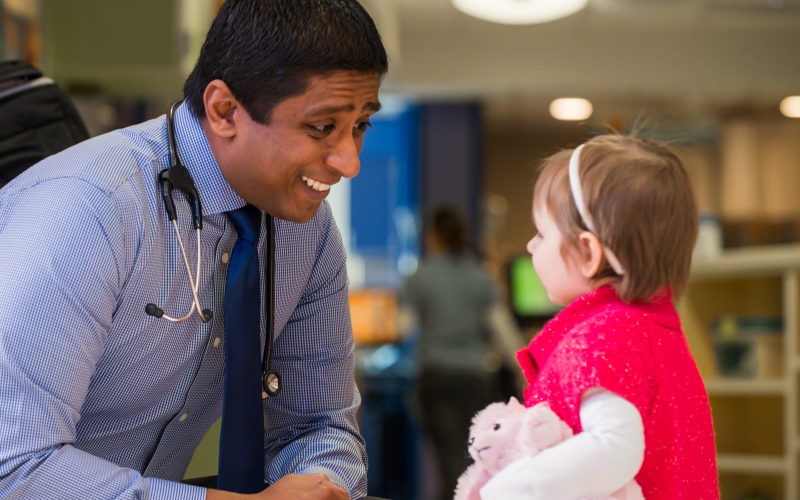 Dr. Glenson Samuel with Malina Cole, one of his patients. Malina volunteered to be part of a study looking for biomarkers for Ewing sarcoma.

Exosomes could hold the key to improving outcomes in patients with Ewing sarcoma.

Thirty years ago, scientists discovered small particles floating outside of cells called exosomes. These particles were thought to be cellular garbage cans that served to clean up any waste produced by cells. But now, researchers, like ALSF Young Investigator Grantee Glenson Samuel, MD of Children’s Mercy Kansas City, are working to understand how exosomes could hold the key to improving outcomes in patients battling Ewing sarcoma, a type of childhood cancer typically arising in the bones of the body.

Understanding Exosomes
Exosomes are far from garbage cans—in fact, exosomes are communication and coordination powerhouses. These little particles are released from cells in the body and then move around orchestrating the growth and survival of tumor cells. Exosomes can help make one part of the body more hospitable to cancer cell growth by encouraging an increase in blood supply. Exosomes can also help cancer cells cloak themselves from the body’s immune system.

Because they are‘mini-me’ versions of the cell of origin, exosomes can also be a great source of a disease’s biomarkers. Exosomes are detectable through a simple blood test and can be used by oncologists to monitor the presence, growth or death of cancer cells.

In the case of Ewing sarcoma, Dr. Samuel discovered that the exosomes present in the blood of patients with confirmed cases of the disease by biopsy contained specific markers that are only present in Ewing sarcoma cancer cells.

Critical Discovery
Dr. Samuel’s discovery gives doctors another leg up on Ewing sarcoma treatment and has the potential to allow for better diagnostics, treatment customization and long-term monitoring. The overall goal of this discovery would be to use this biomarker during therapy to help doctors see when a treatment is working (there would be less exosomes in the blood) or not working (there would be more exosomes in the blood).

After treatment, this biomarker test could be used to detect recurrence of disease before cancer cells may appear on a MRI scan. Since testing for the biomarker requires just 1/20 of a teaspoon of blood, it is non-invasive and relatively easy to add to a child’s routine clinic visit.

In the future, the biomarker test could make the initial diagnosis of Ewing sarcoma faster and potentially help doctors avoid the need for invasive biopsies.

“There is also the potential to apply what we are learning here to other types of pediatric sarcomas,” said Dr. Samuel.

Patients Powering Progress
Dr. Samuel’s research was made possible, in part, by funding from ALSF. But the real heroes of his research were the patients willing to donate a little extra blood during their clinic appointments.

One childhood cancer hero, Malina Cole, was diagnosed with Ewing sarcoma when she was just over a year old. Her parents were told about Dr. Samuel’s study and immediately decided to sign on. All Malina had to do was give one extra vial of blood at each clinic visit with her usual blood tests during her regularly scheduled clinic visits. Dr. Samuel is using Malina's samples and samples from several other kids seen at Children’s Mercy to study the presence of Ewing sarcoma biomarkers during and after their treatment. In Malina’s case, the standard treatment protocol of surgery, chemotherapy and radiation has worked. Today, she is 5 years old and is cancer-free.

With the help of these children battling Ewing sarcoma, Dr. Samuel proved that his biomarker test for Ewing sarcoma worked—paving the way for a May 2017 NIH grant that Dr. Samuel and his colleagues at the University of Kansas Cancer Center (Andrew K. Godwin, PhD and Yong Zeng, PhD) will use to develop a microfluidic chip that can check for the presence of Ewing sarcoma-derived exosomes in the blood. This chip has the potential to enable results to be ready within a few hours, giving doctors invaluable time to make treatment decisions and save lives.