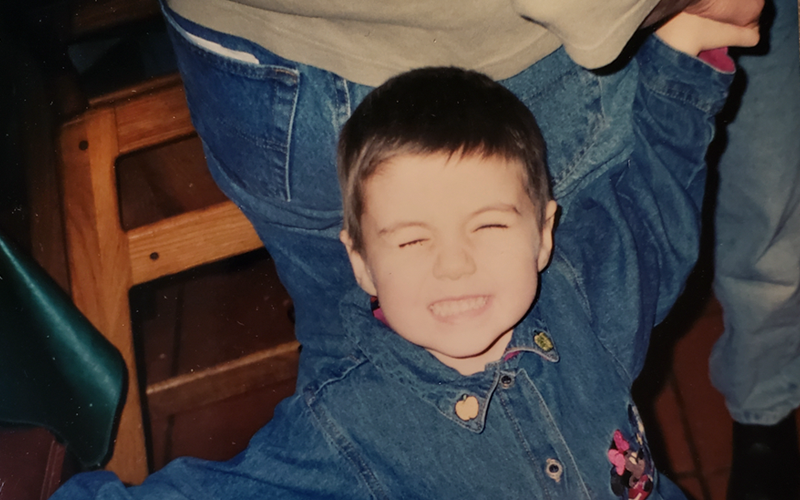 We didn’t accept that. We found a doctor willing to enroll her in a new experimental treatment. It required a radioactive liquid injection followed by a brief period of isolation for Alex. Upon leaving the hospital, Alex told us the treatment had worked; she felt better, well enough in fact that she wanted to go shopping for a Christmas dress. The treatment worked so well that doctors offered to give her a stem cell transplant. This treatment is similar to a bone marrow transplant, requiring isolation in the hospital for a month.

Before the bone marrow transplant, we celebrated Alex's 4th birthday in January with a “surprise” party... that she planned. The next day, Alex entered the hospital for the transplant. We were terrified over what was to come. For me, the scariest part was how the transplant was described: they would give her as much chemotherapy as possible to kill the cancer, but not kill her. Then, when the most chemotherapy has been administered, they would give her some of her own cells they had saved to “bring her back to life.”

Isolating with Alex meant several things: no visitors, except the occasional doctor or nurse wearing a mask to protect Alex the entire time (even during sleep), disinfecting before entering the room, and absolutely no eating or drinking in the room, except for Alex. For me, one of the most difficult things was constantly wearing the mask. I felt trapped in that mask. That stupid mask sometimes made me feel like I was suffocating, but I didn’t want to risk getting Alex sick with my germs while she was immunocompromised. Occasionally, in the middle of the night, while lying on the hospital cot, I would cover my head with a sheet and slide the mask over to try and get some cool, fresh air. I still remember how refreshing those breaths were.

The feeling of isolation for Alex must have felt a lot like what we are all feeling during the COVID-19 social distancing. Back then, my wife and I were each able to leave for half a day, but Alex had to stay in that one room. We watched videos, but we didn’t have cell phones or internet. I remember Alex being in a mostly good mood with a positive outlook. We had our routine of reading books and her daily shower. We would also play a lot of Pretty Pretty Princess, a game I lost every single day, except once. You should know that the winner gets to wear all of the royal accessories that come with it. The day I won, adorned with the princess jewelry and crown, I was celebrating my victory... just as the doctor came in for the final check-up of the night. How I wish that there were cell phones back then. I would cherish that photo with Alex.

As we all navigate this new experience of isolation in today’s world, along with feelings of loneliness, boredom and fear for the future, I think back to that time I got to spend with Alex. I was lucky to be in isolation with her. I would give anything for more isolation time together. I would gladly play Pretty Pretty Princess if she wanted to.

During that month-long stay in the hospital, one day Alex said, “When I get out of here, I want to set up a lemonade stand.”

The rest of the story many of you know: Alex hosted her first lemonade stand, and then even more lemonade stands, inspiring people everywhere to join the fight to cure childhood cancer. Her isolation sparked one of the most community-driven movements on the planet with children, families, businesses and friends holding lemonade stands all for one mission: cures for children with cancer.

During Alex's isolation, we learned so much. These days, there is one lesson especially that we should all remember:

Greatness can come out of trying times and isolation.

What will be your lemonade stand moment?