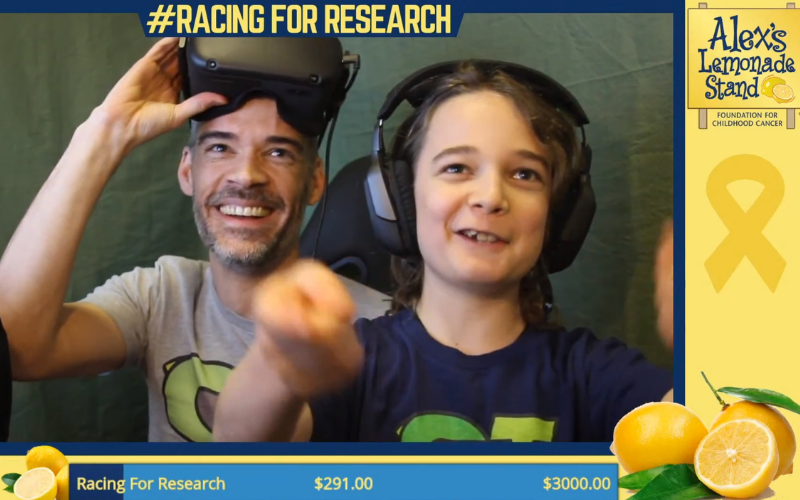 After his son Liam’s brain tumor diagnosis and treatment, Allen knew he wanted to do something to help other kids facing cancer. Allen turned to his hobby, simulation racing games (Sim racing), and his friends to raise more than $6,500 for Alex’s Lemonade Stand Foundation through a livestream event.

Liam was 7 years old when his parents Allen and Laura started noticing that his eyelids were drooping and fluttering.

“I asked him if he was tired,” recalls Allen.

The fluttering was first suspected to be a rare autoimmune disorder. Blood work did not confirm the diagnosis. After months of not knowing for sure what was wrong with her son, Laura found an autoimmune disorder specialist at Children’s Hospital of Philadelphia (CHOP), thousands of miles away from their home in Dallas.

Once at CHOP, the specialist nearly immediately confirmed that Liam did not have myasthenia and sent the family back to Texas with instructions to head to the emergency room with a note explaining the specialist’s suspicions.

“The doctor told us to return home, pack our things and prepare to not leave the emergency room once we arrived,” said Allen.

Liam received a CT scan and a preliminary diagnosis: a brain tumor on his brain stem that was also blocking his ventricles, resulting in massive pressure in his brain and the drooping eye lids.

Liam would have two brain surgeries and 25 rounds of radiation in order to shrink and stabilize the tumor. Now 11 years old and in 5th grade, Liam’s tumor is stable. You’d never know that Liam battled a brain tumor, but you would know that he is a kind, compassionate kid.

With Liam stable and out of the chaos of the initial diagnosis and treatment, Allen knew he wanted to do something to help find more treatments and cures for other children.

So, Allen turned to his hobby — sim racing games — and his friends who enjoyed playing with him.

“Sim racing has always been kind of my therapy. I can relax and just focus on the race,” said Allen.

During the COVID-19 Pandemic, Allen started his own YouTube channel and began livestreaming his races with fellow gaming friends. He noticed that ALSF was on Tiltify, a platform that connects gamers with charities and saw their mission to fund research.

An idea formed and he began reaching out to other YouTubers, some with large followings. Allen wanted to host a 12-hour sim racing stream and invite viewers to donate. The community was inspired by Liam’s story and Allen’s idea. On the day of the stream, Liam did some of the live racing. The result: more than $6,500 was raised to help fund childhood cancer research.

“The techniques that saved my son’s life did not exist a couple years ago and without people funding research and finding advancements my son would not be here,” said Allen.

Join the Gamers for Kids with Cancer Stream-a-thon
December 28 – 30, 2020
Game for good this holiday season – support childhood cancer research by playing the video games you love! Whether you’re a casual or competitive gamer, you can have fun streaming your favorite game as you fundraise for safer, more effective treatments that kids with cancer need. Are you in?