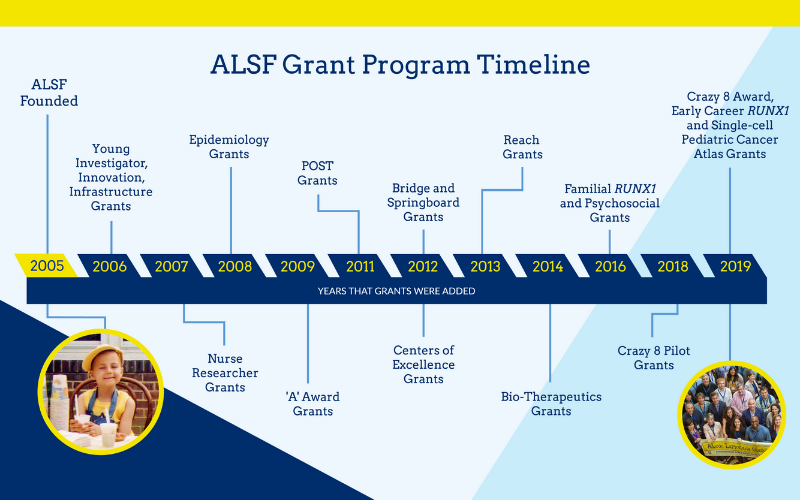 When Alex's Lemonade Stand Foundation (ALSF) founder Alex Scott had a treatment that made her feel better, after months and years of feeling sick while in treatment for neuroblastoma, an idea formed: the money raised with a lemonade stand could help doctors figure out how to make other kids feel better too.

That simple, but profound idea kicked off a movement to cure childhood cancer and in 2005, Alex’s front yard lemonade stand, became Alex’s Lemonade Stand Foundation. Today, ALSF has funded more than $150 million dollars in childhood cancer research, for a total of more than 1,000 research projects at nearly 150 institutions. These projects have filled funding gaps and over time have led to major improvements in the way children with cancer are diagnosed and treated.

Here are some highlights from 20 years of funding research:

2008: ALSF added Epidemiology grants to learn more about childhood cancer across human populations, to understand risk factors and subgroups at risk and to study the early detection and prevention of childhood cancer.

2009:  The ‘A’ Awards were added, which aimed to launch to the careers of pediatric cancer researchers by providing major start-up funds just as they start their own labs as Assistant Professors.

2016: The RUNX1 grants were introduced and designed to foster studies specific to RUNX1 Familial Platelet Disorder and Psychosocial grants aimed at addressing the psychosocial and behavioral health outcomes for children with cancer and their families.

2017: The Childhood Cancer Data Lab launches with the mission to empower childhood cancer researchers to harness the power of big data by providing tools and training to do so.

2019: ALSF launched the Crazy 8 Award, a large collaborative grant tackling the most intractable childhood cancers. These grants, ALSF’s largest ever, fund projects up to $5 million dollars over four years and are intended to be game-changing awards.

The Future: Safer Treatments and Cures
The tides of treatment are starting to change. Because of foundations like ALSF continuously funding childhood cancer research, scientists now know so much more about the underpinnings of childhood cancers. In the past ten years, less than 30 new drugs have been approved by the FDA for pediatric oncology applications. ALSF supported the research that led to the approval of at least nine of these new drug therapies.